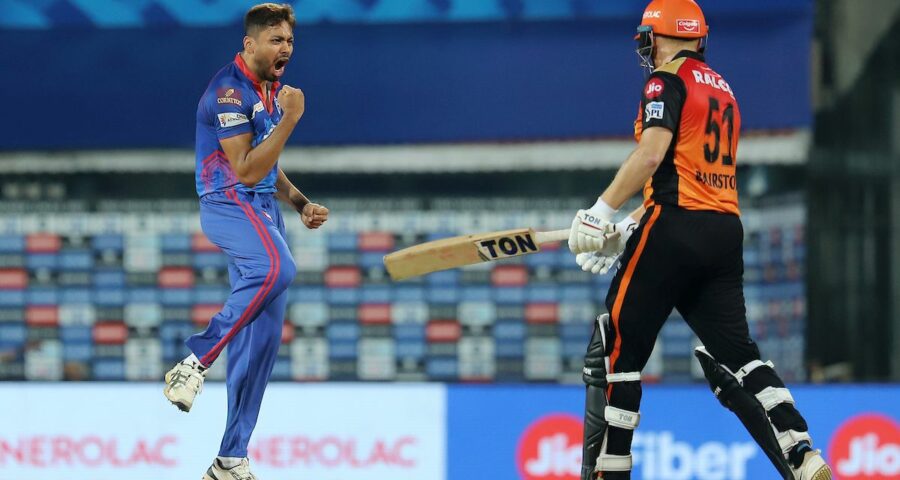 Warner had, on Wednesday, slammed the Chennai pitch as ‘shocking’ following their victory over Punjab Kings, but once again SRH landed on the wrong side of the result, losing to Delhi Capitals in the Super Over, after losing the toss (again) and batting second.

Delhi got off to a good start with Openers Prithvi Shaw and Shikhar Dhawan posting an 81-run stand. But once they were dismissed, Delhi could only muster 159-4 as the SRH bowlers kept it tight.

Even though Warner was run out in the next over, Bairstow, dropped on 4 in the second over, went after the bowling — Ravichandran Ashwin and Axar Patel being his bunnies.

DC Captain Rishabh Pant then brought out his wild card — Avesh Khan coming on to bowl the 5th over.

Kane Williamson started the over with a four, past cover-point. The batsmen then ran a quick single, Williamson surviving a missed chance of a run out.

The next ball was a slower one and Bairstow smoked it over long on for a six.

Avesh then had his revenge and the wicket DC badly wanted. Bairstow (38 off 18) miscued the next ball, which was fuller, and his attempted big shot only went down to Dhawan at mid-on.

When he was brought back into the attack in the 12th over, Avesh took out Virat Singh to end his struggle at the crease.

That exposed SRH’s fragile middle order as Kedar Jadhav (9) and Abhishek Singh (0) fell cheaply before Avesh returned in the 19th over to clean up Vijay Shankar and have the SRH innings in a mess.

Avesh stepped up whenever called upon by Pant and finished with figures of 3 for 34. Taking out Bairstow helped put DC in the front seat and with an unstable SRH middle-order the pressure was squarely on Williamson.

Jagadeesha Suchith’s hitting in the death overs and Williamson’s half-century was not enough as DC did well to take the game into the Super Over and eventually edge SRH out of the contest.