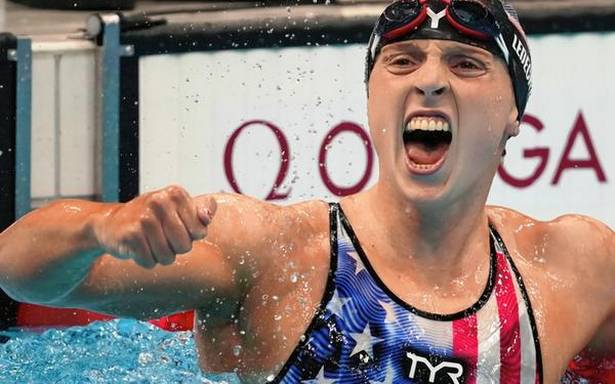 Hungarian Kristof Milak powered to the men’s 200m butterfly gold medal, despite sporting torn trunks which he claimed cost him a world record, at the Olympic Games here on Thursday.

“They split 10 minutes before I entered the pool and in that moment I knew the world record was gone,” he told reporters after the race, angrily throwing the torn togs at a table. “I lost my focus and knew I couldn’t do it.”

The chances of US superstar Caeleb Dressel winning a much-touted seven gold medals in Tokyo vanished when he opted out of the 4x200m relay squad that finished fourth behind winner Great Britain.

Led off by Tom Dean and brought home by Duncan Scott, Great Britain touched in 6:58.58sec, just outside the 6:58.55 world record held by the United States.

In the women’s events, an electric Ariarne Titmus dethroned Katie Ledecky to become the 200m freestyle champion, only for the gutsy American great to bounce back and clinch the first-ever women’s Olympic 1500m freestyle title. Australian Titmus now has two golds, both at Ledecky’s expense after upsetting her arch-rival to win the 400m free on Monday.

Titmus powered through the field from third at 150m to touch in a new Olympic record time of 1min 53.50sec, with a sluggish Ledecky fifth.

“Bloody exhausted, that was tough one,” said Titmus.

“Honestly, it’s not the time that I thought I could do this morning but it’s the Olympics and there’s a lot of other things going on. So it’s just about winning here and I’m very happy.” Despite the crushing loss of two titles, Ledecky was back in the pool barely 75 minutes later for a brutal 1500m, one of three new swim events on the programme this year.

The world record-holder is dominant in the event and didn’t disappoint, producing a commanding swim to claim gold in 15:37.34. “It means a lot. I think people maybe feel bad for me because I’m not winning everything and whatever but I want people to be more concerned about other things in the world, people who are truly suffering.”

Japan’s Yui Ohashi, produced a strong freestyle leg to touch in 2:08.52 and take the 200m individual medley title, making it a Tokyo double after her earlier triumph in the 400m medley.