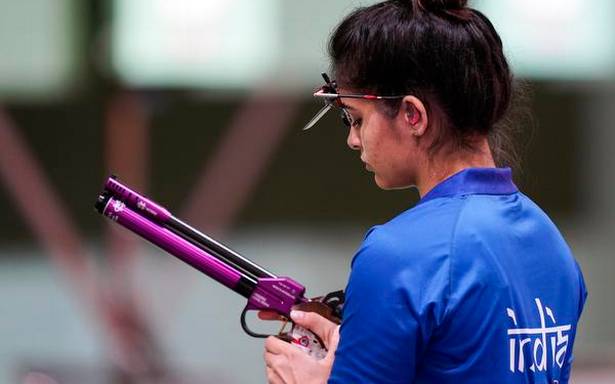 The first two days’ performance, or, the lack of it, is certainly going to raise a few eyebrows within the Indian shooting fraternity

The fancied Indian shooting team drew a blank for the second day running in the Tokyo Olympics in Tokyo, with a major weapon malfunction leading to a heartbreaking exit for the young Manu Bhaker in the women’s 10 air pistol event.

Appearing in her maiden Olympics, the 19-year-old Manu finished a creditable 12th, despite losing nearly 20 minutes during the qualifications after the cocking lever in her pistol broke down, forcing her to go to a designated area for getting it fixed.

Yashaswini Singh Deswal, the other first-timer at the Games, recovered from a subdued start to end 13th, with a total score of 574.

In the men’s 10 air rifle event, both the experienced Deepak Kumar and the teenaged Divyansh Singh Panwar finished a lowly 26th and 32nd respectively.

Deepak aggregated 624.7 while Divyansh shot 622.8 over the six series, scores which were never going to be enough to make the final.

Taken together, the first two days’ performance, or, the lack of it, is certainly going to raise a few eyebrows within the Indian shooting fraternity, including the National Rifle Association of India (NRAI), which has done its bit in preparing its athletes.

While the pistol shooters, especially the young Saurabh Chaudhary and Manu, put up a strong fight in their maiden appearances on a stage as grand as the Olympics, the scores registered by the ones in rifle events left a lot to be desired.

According to an insider in the NRAI, the federation is certainly feeling let down with the scores of the rifle shooters — Deepak, Divyansh and Apurvi Chandela and Elavenil Valarivan in the women’s 10m qualifications on Saturday.

He added that it’s still early days as far the Indian shooting team’s participation in the ongoing Games is concerned as 12 starts remain.

On the recommendation of the Abhinav Bindra-led panel following the 2016 Rio Games debacle, reforms were ushered in for the betterment of the sport, evidence of which was its dominant showing in World Cups, Asian Games and other international tournaments.

But in the Japanese capital, the script did not pan out the way the shooters or the federation would have wanted it to. NRAI, however, banks on the shooters to come back stronger in the coming days.

Earlier in the day, the 19-year-old Manu, ranked number two in the world, was badly affected by a malfunction involving her pistol after an impressive start saw her take one of the places in the top eight.

When the technical snag — the pistol’s cocking lever broke down — happened, she was left to shoot 44 shots in 55 minutes.

And when she came back to the firing point after getting the issue sorted, Manu had to complete the remaining number of shots in 36 minutes, an improbable task at any level of competition.

After she had returned to the range, more agony awaited the 19-year-old as 4-5 minutes were lost in checking the repaired gun in the sighter (practice).

With a 98, the Commonwealth Games and Youth Olympics gold medallist tried to stage a comeback of sorts in the fifth series, but caved in under pressure in a poor final series, which saw her register one 8 and three 9s, leaving Frenchwoman Celine Goberville to bag the eighth and last qualifying spot.

Meanwhile, it was mostly an up and down outing for world number one Yashaswini, who shot her way back into contention with a 98 in the second series, including scoring five 10s in the second part, after a subdued start.

R.O.C’s (Russian Olympic Committee) Vitalina Batsarashkina won the gold medal with an Olympic record 240.3 in the final, Bulgaria’s Antoaneta Kostadinova bagged silver with 239.4 while Ranxin Jiang of China ended with the bronze after shooting 218.0.

For Deepak and Divyansh, it was always going to be a tough task after they started off with 102.9 and 102.7, respectively, at the Akasa Range.

They were never in the picture and things kept getting worse as a series of scores, ranging from 9.7 to 9.9, marred their qualifications that comprised 47 participants including big names such as Istvan Peni of Hungaria, U.S.A’s Lucas Kozeniesky, Petar Gorsa of Croatia and the Russian Olympic Committee’s Sergey Kameniskiy.

While Deepak did shoot a 105.2 and 105.3 in the fourth and sixth series, he needed them in the beginning of the match to set himself up nicely. This was after the non-commissioned officer of the Indian Air Force found himself four spots from the bottom of the pile.