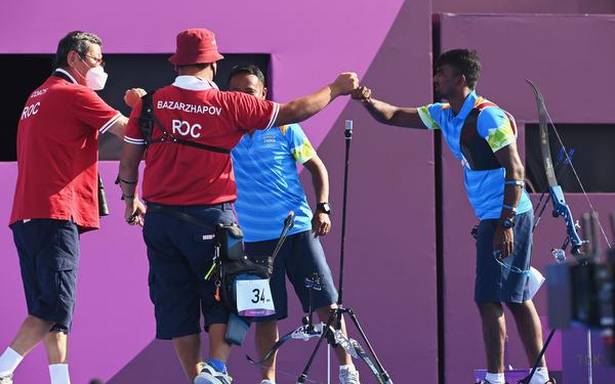 Jadhav, who was impressive in the team events as well, will take on the winners of world no.1 Brady Ellison of USA and Milad Vaziri Teymoorlooei of Iran in his round of 32 clash

The windy conditions at the Yumenoshima Park in Tokyo troubled the Russian, who struggled with two 7s and an 8, but the 25-year-old Indian looked calm and composed to wrap it up 6-0.

Jadhav, who was impressive in the team events as well, will take on the winners of world no.1 Brady Ellison of USA and Milad Vaziri Teymoorlooei of Iran in his round of 32 clash.

However, Jadhav’s senior Army colleague Tarundeep Rai lost to Itay Shanny of Israel in a tight shoot-off finish for a heartbreaking second round exit in his last Olympics.

Both players were locked 5-5 but Shanny, who is 15 years younger to Rai, sealed the match 10-9 with a perfect score in the shoot-off.

The world number 92 Israeli, who had knocked out Japanese team event bronze medallist Muto Hiroki in the first round, was superior to the Indian at the death as he shot three 10s from the final four arrows to sail into the pre-quarterfinals.

This was the second successive round two exit for three-time Olympian Rai who had made his Games debut at Athens 2004. In 2012 London Olympics too, Rai had lost in the second round.

The 37-year-old Army man, who had a thrilling come-from-behind 6-4 win over Oleksii Hunbin of Ukraine in the first round, once again showed remarkable poise as he bounced back to lead 5-3 from a 0-2 deficit.

Needing a tie in the fifth set to move into last-16, Rai faltered and Shanny won the set by two points, drilling in two 10s and a nine, as against the Indian’s sequence of 9-8-9.

A perfect 10 kept eluded Rai and the world number 54 started the proceedings in the shoot-off with a 9, while Shanny sealed the issue with a 10.

Rai was severely affected by wind as he shot a poor seven to lose the first set by four points before levelling the match 2-2 by winning the second set by slender margin of one point.

A series of six 9s by Shanny meant that Rai snatched a 5-3 lead but failed to tie the fifth set.