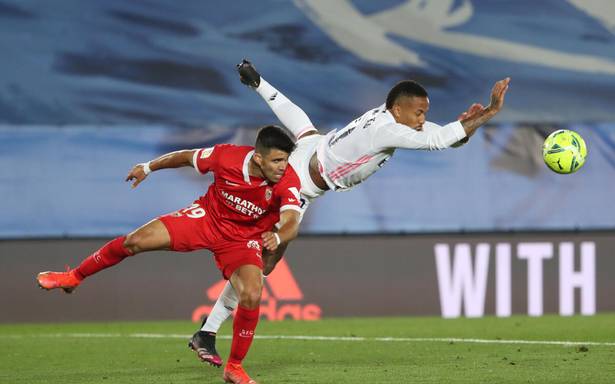 The result left Atletico Madrid in first place with three games to go on 77 points, two ahead of second-placed Real and third-placed Barcelona.

Real Madrid missed the chance to top La Liga after drawing 2-2 at home to Sevilla on Sunday but they earned a point when an own goal from Diego Carlos in added time added a final twist to a remarkable game containing two huge VAR decisions.

The result left Atletico Madrid in first place with three games to go on 77 points, two ahead of second-placed Real and third-placed Barcelona. Sevilla are fourth on 71.

Brazilian midfielder Fernando put Sevilla in front midway through the first half after a headed effort from Real striker Karim Benzema had been ruled out for a marginal offside.

A goal from Marco Asensio pulled Zinedine Zidane’s side level in the 67th but the game swung back in Sevilla’s favour in an extraordinary turn of events.

Real launched a quick counter and Benzema earned a penalty when he was felled by goalkeeper Bono, but a VAR review led to the referee penalising Real defender Eder Militao for an earlier handball and awarding a spot kick to Sevilla instead.

Former Barcelona midfielder Ivan Rakitic kept his nerve to deceive Thibaut Courtois from the spot and restore Sevilla’s lead in the 77th minute.

However, Real somehow stayed alive in an enthralling title race when Toni Kroos tried his luck and saw his shot diverted into the net off the boot of Diego Carlos.

Real coach Zinedine Zidane came on the pitch after the fulltime whistle to speak to referee Juan Martinez Munuera and admitted being annoyed by the penalty, awarded as Militao handled after leaping in the air to defend a cross.

"I’m very angry, someone needs to explain the handball rule to me. It’s very difficult to take because we played very well but it is what it is," Zidane told reporters.

"I don’t like to speak about the referees, but today the sensations are not good."

The own goal, in the third minute of added time, was the final twist in a huge weekend for the title race after Atletico stayed top with a 0-0 draw at Barca on Saturday.

The stalemate at the Camp Nou offered title holders Real the chance to lead the standings and leave their fate in their own hands although they went into the game in low spirits after their Champions League semi-final exit to Chelsea on Wednesday.

Zidane shook up his starting 11 by dropping Eden Hazard after the Belgian’s poor display in the 2-0 defeat at Stamford Bridge and was without captain Sergio Ramos, ruled out with injury in a season riddled with fitness setbacks.

The Frenchman’s side were poor in the first half but looked to have gone ahead when Benzema leapt to turn in an excellent cross from right back Alvaro Odriozola.

The goal was chalked off though as Odriozola’s foot was a couple of inches offside, although the incident was overshadowed by the second VAR review in the second half of an entertaining contest with so much at stake at the top of the standings.

"We have let two points escape today, we did everything to win the game," said Real midfielder Luka Modric. "But the ball wouldn’t go in and then we earn a penalty which is taken away and another is given down the other end. But we’re still alive."