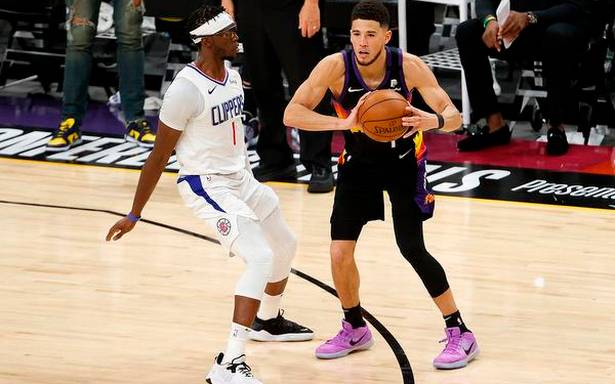 Hawks get the better of 76ers

Devin Booker delivered a 40-point triple-double as Phoenix Suns shook off some playoff rust to beat the fourth-seeded Los Angeles Clippers 120-114 in the opening game of the Western Conference finals here on Sunday.

Booker also had 13 rebounds and 11 assists for his first career triple-double as the Suns won despite the absence of all-star guard Chris Paul, who has been quarantining due to the NBA’s Covid-19 health and safety protocols.

For the Clippers, Paul George scored 34 points, Reggie Jackson had 24 points and DeMarcus Cousins added 11 points off the bench.

Man with a mission

“I’m just going out there to win every game possible,” said Booker. “I’ve been saying this since the start of the playoffs — every next game is the biggest game.”

This is an unexpected NBA final four match-up between two franchises trying to cap their storybook seasons by winning their first titles. The Clippers have never been to the Conference finals before and the Suns last made it in 2010.

Kevin Huerter scored a playoff career-high 27 points as the upstart Atlanta Hawks punched its ticket to a first Eastern Conference finals in six years, with a 103-96 game seven win over host Philadelphia 76ers.

All-star Trae Young finished with 21 points, John Collins had 14 and Danilo Gallinari came off the bench to score 17 points for the Hawks, who won three games in Philadelphia to take the series 4-3.

The Hawks will now face the Milwaukee Bucks in game one of their series on Wednesday.