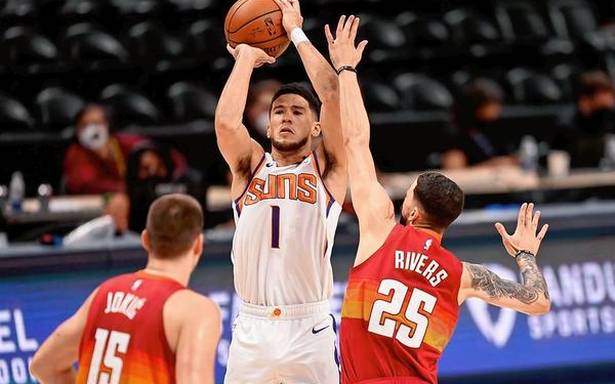 Bucks win big to tie series with Nets at 2-2

Chris Paul and Devin Booker combined for 71 points as Phoenix Suns completed a four-game sweep of Denver Nuggets on Sunday to reach the NBA conference finals for the first time in 11 years.

Paul scored 37 points and Booker finished with 34 points and 11 rebounds as the Suns beat the Nuggets 125-118 to capture the Western Conference second round series 4-0.

The Suns used a balanced attack to overpower the Nuggets and league MVP Nikola Jokic, who was slapped with a flagrant foul and ejected from the game in the third quarter. Jokic finished with 22 points and 11 rebounds.

The Suns will play either Los Angeles Clippers or Utah Jazz for a spot in the NBA finals.

Elsewhere, Giannis Antetokounmpo poured in 34 points and grabbed 12 rebounds as Milwaukee Bucks evened their Eastern Conference semifinal series with a 107-96 rout of Brooklyn Nets, who lost Kyrie Irving to an injury.

Antetokounmpo delivered his best performance of the postseason, shooting 14-of-26 from the field and scoring 12 points in the third quarter.

Kevin Durant finished with 28 points and 13 rebounds but the Nets struggled offensively after Irving exited the game in the second quarter and did not return.

Irving injured his right ankle with just over six minutes left in the first half after he stepped awkwardly on Antetokounmpo’s foot.