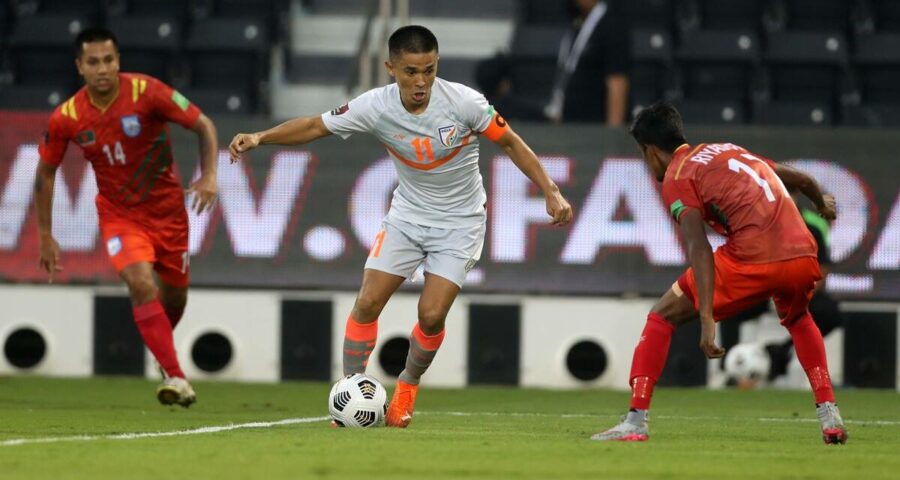 Sunil Chhetri scored two goals in a span of 13 minutes to help India seal a 2-0 victory, India’s first win in a World Cup qualifier away from home since 2001. “I do not count the number of goals. 10 years later, we will sit together, have a chat and then count,” smiled Sunil Chhetri immediately after the final whistle against Bangladesh in the FIFA World Cup Qualifiers Qatar 2022.

Sunil scored two goals in a span of 13 minutes to help India seal a 2-0 victory, India’s first win in a World Cup qualifier away from home since 2001.

The record book states that Chhetri, on 74 goals, is second behind Cristiano Ronaldo in the all-time goal scorer’s list among active players in International Football, as he overtook Lionel Messi who is on 72 goals.

“Many people keep on asking as to when Sunil is going to retire. He works so hard on the pitch, and in every training session, he is by far the best. He is in such good shape and is working with such professionalism. He is working as if he is 25, playing as if he is 25, and scoring goals like he is 25,” Head Coach Igor Stimac stated.

‘Ironman’ Sandesh Jhingan felt that Sunil’s name will still be remembered even after a century. “Some 100 or 200 years down the line, people will still talk about Sunil Chhetri. As long as there is Indian Football, people will remember his name. It’s for everyone to see what he does on the field. Hence, I would rather like to mention that off the field he is the perfect example for all to follow.”

“I will keep on mentioning that there’s one guy floating in between Cristiano Ronaldo and Lionel Messi – and that’s my teammate, my captain Sunil Chhetri,” Gurpreet Singh Sandhu expressed. “It shows his commitment and how consistent he has been scoring goals – one after the other. It’s simply remarkable,” he added.

Chhetri smiled, looked to his side, shook his head, and smiled again. “The match against Bangladesh was a tough match, frustrating at times,” he referred. “We were guilty of missing a lot of chances. We could have done better. It has been a topsy-turvy qualifying campaign. Looking back, we understand that we could have done a lot better. We will talk about it but I am happy that we got three points,” Chhetri said.

One reminds him about his international goals. “You know what. All of this is past. We play Afghanistan, and we have to be at our best. It will be a new day, a new canvas. And it is up to us to paint it the manner we want to,” he argued.

The alarm on his watch rings. Sunil gets up, gestures and walks off for the recovery session at the gym. The session is some 10 minutes away but he knows he cannot be late. In fact, and you can bet he will be the first one to step in.