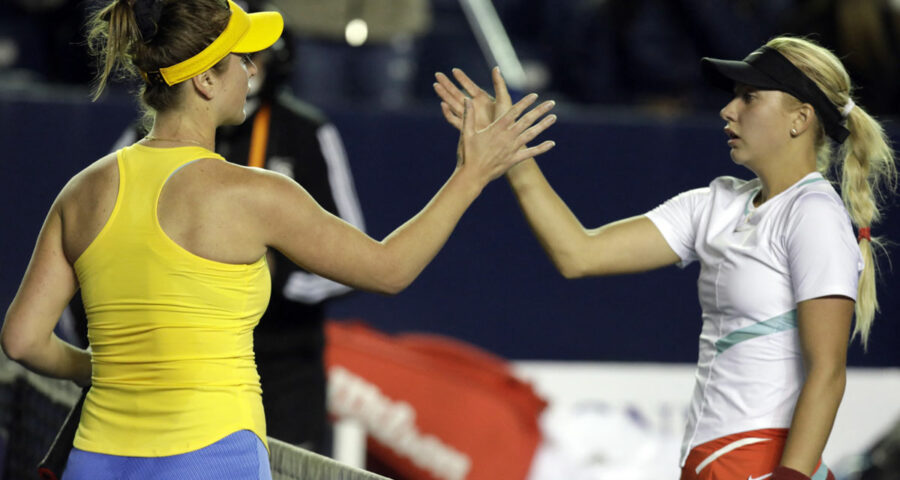 Top-seeded Elina Svitolina of Ukraine, wearing her national colors of blue and yellow, won on “a special night for me,” beating Russia’s Anastasia Potapova 6-2, 6-1 on Tuesday in the first round of the Abierto GNP Seguros in Monterrey, Mexico.

Svitolina had been outspoken in the wake of Russia’s military invasion of Ukraine, announcing she would refuse to play a Russian or Belarusian opponent unless the tennis hierarchy moved to strike the nationality of those players.

The ATP Tour, WTA Tour, International Tennis Federation and the governing bodies sanctioning the four Grand Slam events issued a joint statement Tuesday, suspending Russian and Belarusian teams from international tournaments but allowing individual players to compete without their national flags and with their nationalities not acknowledged. Svitolina, who is ranked 15th in the world, then agreed to play against Potapova, who is ranked 115th. The match lasted just over an hour, with Svitolina saving all three break points she faced.

Elsewhere in the event, the United States’ Sloane Stephens withdrew shortly before she was due to play her opening match. Stephens had just won the title at Guadalajara, Mexico, on Sunday, her first tournament championship in nearly four years. Four days after fleeing her native Ukraine amid Russia’s invasion, Dayana Yastremska won a three-hour, five-minute thriller over Romania’s Ana Bogdan, 3-6, 7-6 (7), 7-6 (7) in the first round in Lyon, France.

“This win, compared to what’s going on in my country, is nothing,” Yastremska said after saving two match points and 11 of 16 overall break points to keep her match going.