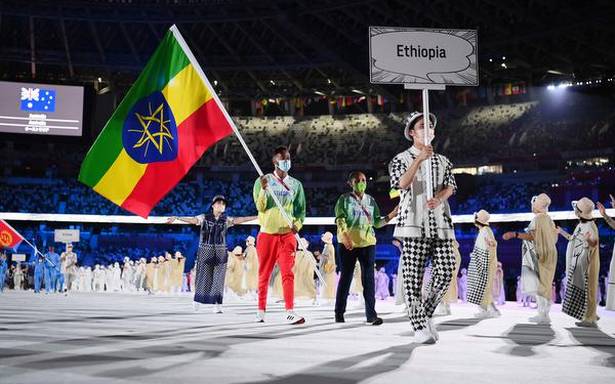 A few countries stood out at the opening ceremony on Friday for having only either a man or a woman bearing the flag, as the International Olympic Committee (IOC) encouraged both male and female flag-bearers.

Ethiopian male swimmer Abdelmalik Muktar and Tajikistani male judoka Temur Rakhimov waved the flags of their respective countries, despite having a mixed delegation.

Congo, on the other hand, had only female sprinter Natacha Ngoye Akamabi represent its mixed team.

In February, the IOC issued a statement asking participant countries to select both a male and female flag-bearer where possible for the first time ever.

Other countries that only had a male flag-bearer, such as the United Arab Emirates, had a male only delegation.

Delegations of countries known for conservative gender values complied with the IOC request, as male rower Husein Alireza and female judoka Tahani Alqahtani both smiled and waved as they held up the Saudi Arabian flag.

The IOC pledged to work towards gender equality after previous Tokyo 2020 Organising Committee President Yoshiro Mori was criticised for making sexist remarks about women in February.

Mori eventually stepped down from his role.

The opening ceremony was mired in scandal in the lead-up to the Games.

A composer and creative director involved in the ceremony both stepped down from their roles days before the start.