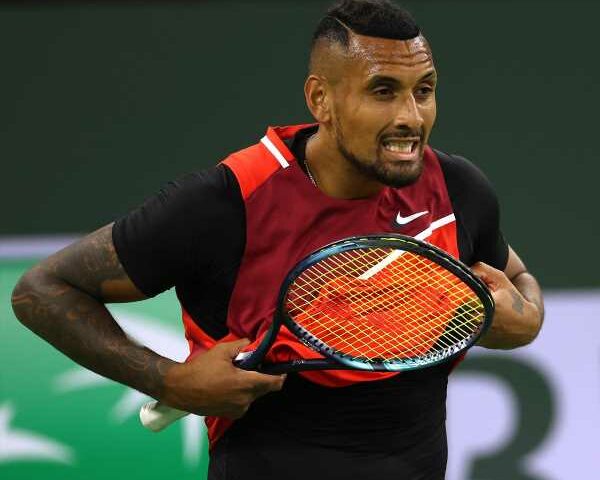 A smiling, smitten Nick Kyrgios said he has never felt better following his first round win at Indian Wells – and made it clear girlfriend Costeen Hatzi is a big reason why he feels he has come of age.

The Australian, who gave a hilarious cooking demonstration at a Citibank-sponsored tennis dinner prior to the tournament, turned up the heat again on Thursday, overwhelming young Argentine Sebastian Baez 6-4, 6-0 in a little over an hour.

“I’m just excited to be back at this tournament. It has been a couple years because of the (coronavirus) pandemic and taking time off to get my mind and body right,” he told reporters after the win.

“My body feels as good as it has ever felt. I feel like I’m moving and playing really well. It’s good to be back.”

Kyrgios in recent years had become as well known for on-court antics and outbursts as he was for his punishing serve.

But he said he is finally free of the left knee pain that plagued him for the past year and a half and is in a great place emotionally.

Asked what contributed to his improved mindset, he smiled and pointed to Hatzi, who was seated in the front row of the press conference.

“I was really struggling. I wasn’t happy,” he said.

“The tennis world wanted me to be a certain player, and I was trying to be something that I wasn’t for so many years. It put me in a dark place. I was letting people down, I fell out with my family. It was tough,” he said.

“I’m Nick Kyrgios and I just go out there and play and have fun and if I win, I win and if I lose, I lose.”

“He stayed in Melbourne for three days, and I took the first flight out with my girlfriend and we went back to Sydney.”

Kyrgios, who was a wild card entry into Indian Wells, will next face 32nd-seeded Argentine Federico Delbonis on Saturday.