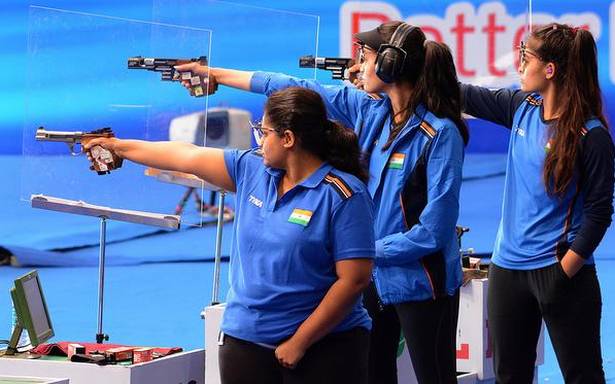 Rahi puts things in perspective as regards the reigning World No.1 in sports pistol.

One swallow does not make a summer. Even if you are World No.1, it does not cut much ice with the stringent Olympic selection policy of the National Rifle Association of India (NRAI).

The omission of Chinki Yadav, the reigning World No.1 in sports pistol, after she had won the World Cup gold in Delhi in March, beating Rahi Sarnobat and Manu Bhaker, may have been perplexing, to say the least. More so, when the Asian Games gold medallist Rahi and the 19-year-old Manu got the nod to shoot the event in Tokyo.

The 23-year-old Chinki, who had won the Olympic quota with a good score of 588 out of 600 in the Asian Championship, even though she finished sixth in the final, was herself quite relaxed about Olympic selection, after her golden fare.

“I was very happy with the way Chinki performed in the Delhi World Cup.

She was not performing that great when the selection policy had started collecting scores for a year or two, reasoned Rahi, who had lost the gold to Chinki in the shoot-off after a tie in a spectacular final.

Manu was the undisputed No.1 in the country with her consistently high scores in the event, even though she had no World Cup medal to show in sports pistol till she won the bronze in Delhi. Rahi and Chinki were almost identical with their averages. “It is important to have consistently high performances in international competitions for a year or two. Otherwise, it is not easy to survive in the Olympic atmosphere under pressure,” said Rahi.

“I want to see her as a teammate in future, in such high level competitions,” added Rahi.

Air pistol World No.1 and a lawyer by profession, Abhishek Verma felt that there was no room for debate, as the national federation had “strictly followed the laid down selection policy”. “It was a fair decision,” Abhishek said.