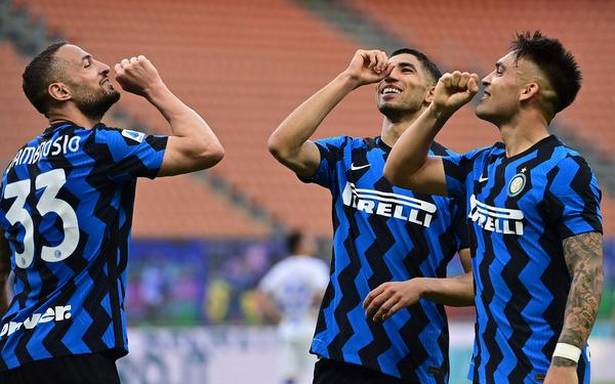 Two goals from Alexis Sanchez helped Inter Milan celebrate their Serie A title success in style with a 5-1 thrashing of Sampdoria at the San Siro on Sunday.

Atalanta’s failure to beat Sassuolo last Sunday ensured leaders Inter were crowned champions for the first time in 11 years, and in their first match since clinching the Scudetto, they showed no sign of letting up.

Roberto Gagliardini got the ball rolling in the fourth minute with the opening goal, before Sanchez netted his first of the game with a fine finish from the edge of the area after 26 minutes.

Keita Balde Diao got one back for Sampdoria in the 35th minute but, straight down the other end, Sanchez steered home a well-controlled volley to restore his side’s two-goal advantage.

After the break, Inter continued to hunt for goals, with young Andrea Pinamonti scoring his first for the club just after the hour mark, before Lautaro Martinez emphatically converted a 70th minute penalty to put the seal on the victory.

"We have worked hard. Behind this success there is a lot of suffering from everyone," Inter coach Antonio Conte told Sky Sport Italia after the match.

"We have restored credibility to the club. Now I want to enjoy this Scudetto from here to the end."

Inter were greeted by thousands of fans outside the stadium ahead of kickoff, all in the mood for a party after waiting so long for another Serie A title.

The team seemed determined to put on a show for fans watching from afar, as even with top goalscorer Romelu Lukaku given a rest, the goals flowed in the San Siro.

Sanchez was given just his 11th league start of the season and celebrated it with his first goal since early March after Gagliardini had broken the deadlock.

Keita’s goal did nothing to stem Inter’s flow, with Sanchez scoring his second less than a minute later.

The second half became a matter of how many Inter could score, as substitute Nicolo Barella brilliantly set up Pinamonti for a goal he will remember, and Martinez got in on the act after a handball by Adrien Silva in the penalty area.

The victory was Inter’s 14th home win in a row, setting a new club record in Serie A, as they amassed their highest points tally since 2008, with the season not over yet.

"We wanted to do well. We tried to do what was in our hearts but Inter managed everything brilliantly," Sampdoria coach Claudio Ranieri said. "We were wrong too much, we knew that Inter could often play like this."