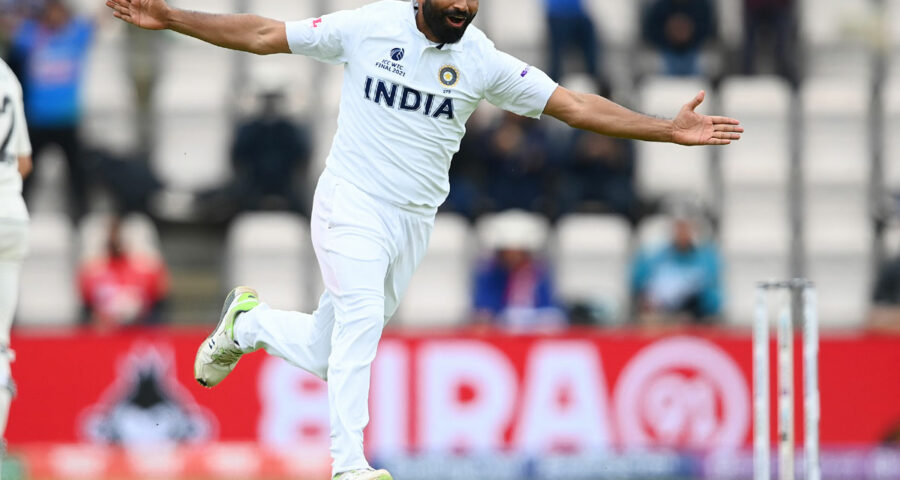 Mohammed Shami inspired India’s fightback with a superb showing with the ball, on Day 5 of the World Test Championship Final against New Zealand in Southampton on Tuesday, June 22, 2021.

Shami, playing his first Test since December, took 4/76 to keep India afloat after New Zealand had threatened to run away with the game at one stage.

New Zealand started off cautiously, with just 16 runs coming in the first hour of play on Day 5.

Shami ended India’s frustration when he sent back veteran Ross Taylor, who was caught by Shubman Gill diving full length to his right in the covers for the first wicket on Day 5.

The seamer then bowled a dream delivery to get rid of B J Watling, who was bowled by a full delivery which swung enough to beat the bat and crash into the stumps.

Colin de Grandhomme (13) seemed keen to lift the scoring in the post-lunch session, but was done in by Shami, who trapped him leg before wicket with a fantastic inswinging delivery.

Kyle Jamieson chanced his arm around for a quickfire 21 from 16 balls, including a six down the ground off Shami. But the pacer got immediate revenge with the short ball as Jamieson top edged the pull shot straight to Jasprit Bumrah at fine leg.

Shami finished with superb figures of 4/76 in 26 overs which helped restrict New Zealand’s lead and keep India in the contest.

Ishant Sharma chipped in with timely strike as he took 3/48, but Bumrah had an off day and could not provide enough support at the other end, going wicketless in 26 overs.

The lack of a fourth seamer meant that India were forced to bring in their two spinners in seamer-friendly conditions. Even though Ravichandran Ashwin (2/28) and Ravindra Jadeja (1/20) got among the wickets, the New Zealand lower order were able to make vital contributions with the bat.

The last four wickets put on 87 runs for New Zealand while India lost their last three wickets in the space of four deliveries.

Captain Kane Williamson was finally dismissed for 49 after a long vigil of 177 deliveries, caught by Virat Kohli in the slips off Ishant. His strike rate of 27.7 is the lowest he has had in an innings where he has reached 20.

Tim Southee smashed some useful runs at the end hitting two sixes and a four in his 46-ball 30 to give New Zealand a slender advantage and leave India with the task of playing out for safety.

Southee then did the damage with the ball, sending back both the Indian openers to put New Zealand in a strong position going into the reserve day on Wednesday.