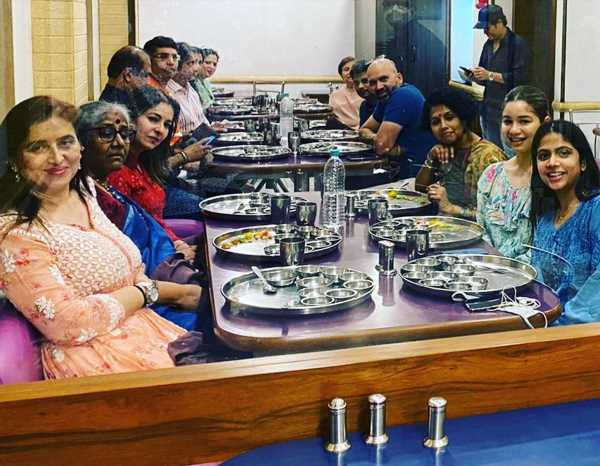 Daughter Sara was present along with family members and friends, including Sachin’s former team-mate Paras Mhambrey — who is likely to be appointed India’s bowling coach — as they feasted on authentic and delicious Gujarati fare. ‘Had a Saras Gujarati thali at Shree Thaker Bhojnalay to celebrate Anjali’s birthday. Her Gujju genes are strong but our jeans buttons were weak after this meal! Also, was amazed to learn that this restaurant is running since 1945,’ the cricket legend kar quipped on Instagram. ‘It is difficult to describe our feeling in words today but we’ll try – We @ShreeThaker may not have hit a century yet but this Diwali definitely felt like we hit a 100. Honored to have the privilege to host @anjali_st @sachin_rt and their beloved family on her birthday’, Shree Thaker Bhojnalay tweeted. Reminiscing in The Times of India some years ago, her late uncle Asit Chandmal recalled these fascinating insights about the paternal side of Anjali’s family: ‘Amru Masi married Jayantilal Mehta, the scion of a rich and distinguished family. I have never forgotten that Anjali’s grandparents, the gentle Jayant Masa and Amru Masi, as well as my other uncles and aunts, paid for my education, in Mumbai and in London.’

‘Jayant Masa’s grandfather, Vijbhucandas Atmaram, made his huge fortune in Bombay. His sons inherited vast properties on Malabar Hill and Warden Road, which they divided by drawing lots amongst themselves,’ Mr Chandmal revealed.

‘Anjali’s great grandfather inherited the mansion opposite the American consulate in Warden Road. She grew up in this palace-like building.’

Anjali’s mum Annabel is English and you can read more about this fascinating lady in Vaihayasi Pande Daniel’s delightful encounter with her here.

Anjali studied at the Bombay International School at Babulnath in south Mumbai, and our late colleague Coomi Shroff Selod, who taught art at the school, remembered her as a topper all through her school years, scoring the highest marks in every subject in class.