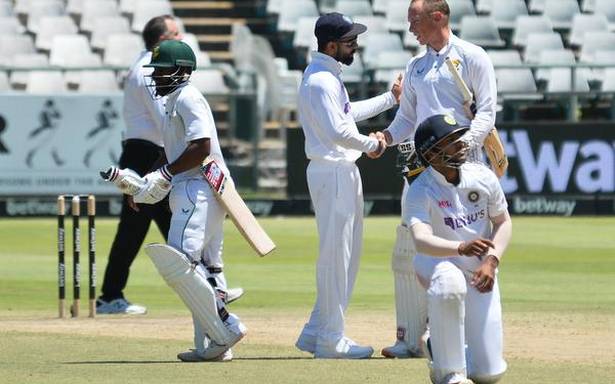 Virat Kohli was unwilling to shed more light on the DRS controversy that rocked play on the third day.

South African captain Dean Elgar said the angry Indians lost focus for a while after the incident and this helped his team whittle down the target.

Kohli said on Friday, “I have no comment to make. We understood what happened on the field and the people on the outside don’t know the exact details of what’s going on on the field.”

The Indian captain added, “For me to justify what we did on the field and say we got carried away…. if we had got charged up and picked three wickets it would have been the moment that changed the game.”

Kohli admitted, “The reality of the situation is we did not apply enough pressure on them for longer periods of time throughout the Test.”

The Indian captain, who was disappointed by the lack of contribution from the lower middle-order and the tail said- “everyone knows they have not stepped up-”. He added “The batting has let us down in the last two games when we needed to address that.”

On the future of Cheteshwar Pujara and Ajinkya Rahane, Kohli said, “We have backed Cheteshwar and Ajinkya for the kind of players they are, what they have done in Tests. You saw their partnership in the second Test.”

Kohli elaborated, “These are the performances, we recognise as a team. What the selectors have in mind, I don’t know.”

The India skipper admitted the series setback was painful. “Obviously we are disappointed. Especially when we had a chance to beat South Africa in South Africa. We are a driven team.”

High quality knock, given the attack and the conditions. We understand what he can offer. He has to learn from mistakes. As a ‘keeper and a batter, he is a special talent.”