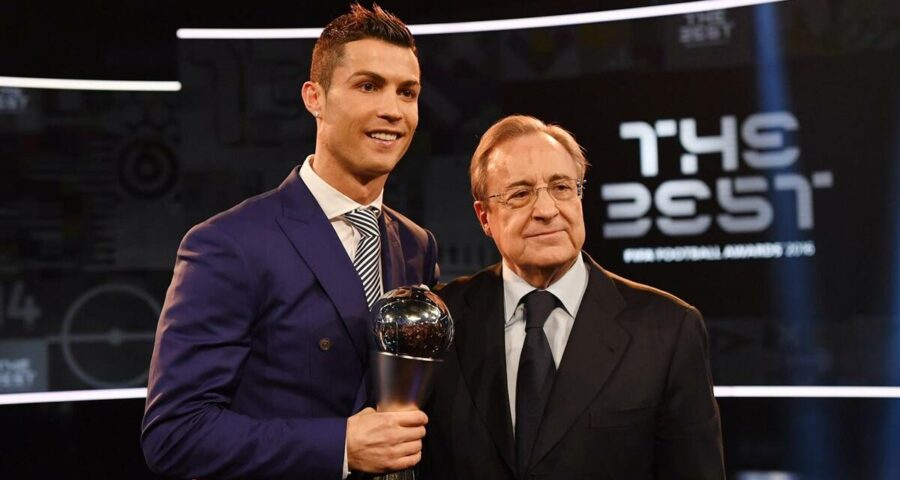 Earlier on Tuesday, Florentino Perez was quoted criticising Real Madrid legends Raul Gonzalez and Iker Casillas as "the biggest frauds" in a recorded conversation in 2006. Real Madrid president Florentino Perez has found himself in the midst of a debacle as a new report claims that he had labelled Cristiano Ronaldo “an idiot” in 2012.

Earlier on Tuesday, Perez was quoted criticising Real Madrid legends Raul Gonzalez and Iker Casillas as “the biggest frauds” in a recorded conversation in 2006. Now, El Confidencial has reported that the 74-year-old former politician had lambasted both Ronaldo and former Real Madrid head coach Jose Mourinho nine years ago.

“He’s crazy,” Perez was quoted as saying about Ronaldo.

“This guy is an idiot, a sick man. You think this guy is normal, but he’s not normal, otherwise, he wouldn’t do all the things he does.”

Ronaldo, who had joined Real Madrid in a record £80 million deal in 2009, ended his stint in 2018 as the club’s all-time top-scorer with 451 goals. He also won four Ballon d’Or awards and four UEFA Champions League titles with the club.

“These are guys with a terrible ego, both spoiled, the coach and him, and they don’t see reality,” Perez had reportedly said. “Mourinho is an idiot. It is not that he does not want to play. Well, he’s a bit abnormal. He drives without a license. That said, he has been overwhelmed by the pressure.”

After his remarks on Raul and Casillas were made public, the Los Blancos president on Tuesday responded in an official statement, saying the comments have been removed from their broader context, adding he intends to take legal action.

“Given the news broadcast in El Confidencial, in which phrases attributed to me are reported, I think it is necessary to clarify. The reproduced phrases are pronounced in conversations clandestinely recorded by Mr. Jose Antonio Abellan, who has been trying to sell them for many years without success,” the statement said.

“It is surprising now that, despite the time that has elapsed, the newspaper El Confidencial reports them today. They are single phrases of conversations taken from the broad context in which they occur.”

“For them to be reproduced now, after so many years have passed since those conversations took place, is I understand due to my participation as one of the promoters of the Super League. I have put the matter in the hands of my lawyers, who are studying the possible actions to take,” it added further.