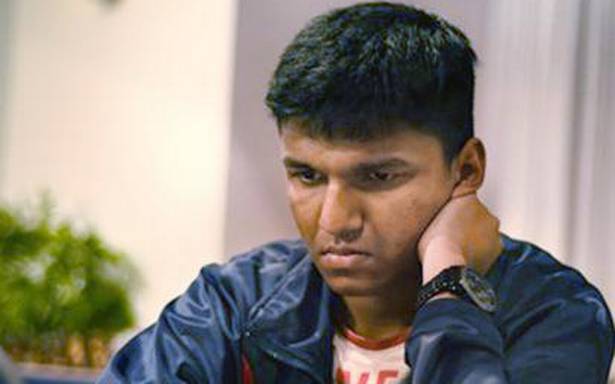 Carlsen shares lead with Duda and Baadur; Konsteniuk and Gunina on top

Harsha Bharathakoti lived up to his reputation of being a fine player in the shorter time duration as he notched up 3.5 points, same as Vidit Gujrathi, after five rounds of the World rapid chess championship at Warsaw on Sunday.

In the 13-round competition, defending champion Magnus Carlsen (Norway), Jan-Krzysztof Duda (Poland) and Jobava Baadur (Georgia) shared the lead on 4.5 points in the 173-player field.

The players are allotted 15 minutes on the clock plus 10-second increments for each move.

Alexandra Konsteniuk and Valentina Gunina (both CRF) shared the lead at four points.

Among the Indians, Harsha punched way above his weight. Armed with a starting rank of 110, the youngster defeated 22nd seed Rauf Memedov (Aze), 36th-ranked Vladislav Kovalev (FIDE) and Volodymyr Onyshchuk (Ukr) in the first three rounds before losing to Carlsen. He drew with 30th seed Sergie Movsesian (Arm) to share the 17th spot.

D. Gukesh (3), among the lowest rated players in the event at 2050, performed at a whopping 2637, after winning odd-numbered rounds against Denis Kadric (BIH), Ehsan Ghaem Maghami (IRI) and Alan Pichot (Arg) to more than make up for the losses to Timur Gareyev (USA) and David Anton (Spain).

The biggest disappointment was P. Harikrishna, the highest rated Indian in the field. The 18th seed, rated 2705, managed only two points to be placed 130th.