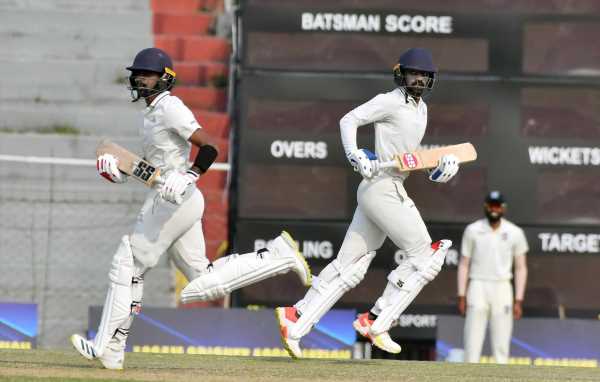 A round-up of the first day’s proceedings in the Ranji Trophy matches across the country.

Twin brothers Baba Indrajith Baba Aparajith put on 206 for the third wicket as formidable Tamil Nadu amassed 308 for 4 against Chattisgarh 251 on the opening day of their Group H Ranji Trophy match, in Guwahati, on Thursday.

The brothers put on 206 runs for the third-wicket as Indrajith continued from where he left in the match against Delhi (117).

Aparajith, who notched his tenth First Class hundred, was unbeaten on 101, off 197 balls, including 8 fours and 2 sixes.

At draw of stumps, Aparajith had the hard-hitting M Shahrukh Khan (batting 28) for company. .

Meanwhile, Ishant Sharma bowled only one short spell of four overs before his Team India colleague Navdeep Saini along with the spinners dismissed Jharkhand for a below par 251 on the opening day of Delhi’s second Group H must-win match.

Ishant and Saini’s entry made Delhi’s attack stronger but the lanky fast bowler (4-1-14-0), after a gingerly first spell, was not brought back for a second spell.

Jharkhand skipper Virat Singh (103 off 171 balls) and opener Nazim Siddiqui (52) were the only two significant contributors.

Opener Devdutt Padikkal (8) fell early to Mujtaba Yousuf (2 for 44)  after Karnataka won the toss and elected to bat.

K V Siddharth, who hit a century in the opening match against Railways, helped Nair add 56 runs for the third wicket.

Nair grew in confidence and was on the lookout for runs. However, the dismissal of Siddharth sparked a mini collapse as Karnataka slipped from 164 for 2 to 190 for 5 and then 209 for 7 after losing Shreyas Gopal (7) and K Gowtham (2) to veteran spinner Parvez Rasool (2 for 51).

Nair kept scoring runs even as he lost partners but he found an able ally in Ronit More, who scored 23 from 59 balls and was involved in a vital 59-run partnership for the eighth wicket.

More, who batted resolutely, fell LBW to Yousuf off the final delivery of the day.

The 30-year Nair holds the key for Karnataka to reach a total of 300 in the first innings.

New Delhi: Mandeep Singh scored a majestic, unbeaten 130, while wicketkeeper-batter Anmol Malhotra also slammed a century as Punjab recovered from a poor start to post 368 for 5 against Haryana on Day 1 of their Ranji Trophy Elite Group F match.

Put in to bat, Punjab lost their opener Prabhsimran Singh for a golden duck, while skipper Abhishek Sharma (24) also failed to convert his start.

The 30-year-old Mandeep then took charge of the proceedings en route to his 14th first-class century.

The Punjab veteran shared two fifty-plus stands with Anmolpreet Singh and Gurkeerat Singh Mann (48) as wickets kept falling at the other end.

Malhotra was out in the final session after completing his century, but Mandeep held firm, striking 13 fours and 2 sixes during his 222-ball stay.

Cuttack: Wicketkeeper-batter Abhishek Porel continued his fine form with a second half century on the trot as Bengal took an upper hand on Day 1 of their Ranji Trophy Group B match against Hyderabad, at the Barabati stadium.

Abhishek, who scored a resilient second innings unbeaten half-century in Bengal’s thrilling win over Baroda in the last match, again provided the resistance, batting at No.8, with a quick 62-ball 73 (10×4) to take the team to 242 in 70.2 overs after they were sent in.

Like against Baroda, when Abhishek and Shahbaz Ahmed produced a match-winning 108-run unbroken stand, the duo showed Bengal the way after they were reeling at 116 for 6, following the loss of Sayan Sekhar Mondal (34), Anustup Majumdar (29) and veteran Manoj Tiwary (2) in the space of just nine runs.

Abhishek took charge in the partnership, hitting 10 boundaries on both sides of the wicket, while Shahbaz chipped in with a 61-ball 40 (2×4) in their 74-run stand for the seventh wicket.

But Abhishek was unable to convert it into a bigger score, cleaned up by Ravi Teja for 73.

“I tried to stay positive, played with positive intent and tried to perform what I’ve practiced so far. I’m also disappointed not to have converted my start and miscued the delivery,” Abhishek said.

“There was no extra pressure. I was confident, as in the last match also I had done the same job while coming in to bat lower down the order,” added the player, who scored a gritty 53 not out in his debut innings.

Earlier, Bengal skipper Abhimanyu Easwaran was dismissed for 0 by Ravi Teja while Sudip Gharami (14) also got out cheaply as the Hyderabad seam duo of Ravi Teja (3/48) and debutant B Punnaiah (2/32) rocked the top-order before left-arm spinner Tanay Thyagarajan (5/71) got into the act.

Sultanpur (Haryana): ‘Crisis man’ Ganesh Satish slammed an unbeaten 146 to propel Vidarbha to 270 for 3 on the opening day of their Ranji Trophy Elite Group G match against Maharashtra.

Opting to bat, Vidarbha lost their openers – in-form skipper Faiz Fazal (14) and Sanjay Raghunath (3) — cheaply, and were in spot of bother at 18 for 2.

Maharashtra’s left-arm medium pacer Mukesh Choudhary (2/47) accounted for both the batters. But, then, one-down batter Atarva Taide (68) joined hands with Satish (146 not out off 282 balls) to not only resurrect the innings but also pummel a pedestrian Maharashtra attack to submission.

While Satish, who was the more aggressive of the two, slammed 19 fours and a six, Taide hammered 10 fours in his 145-ball knock.

The duo conjured a crucial 177-run stand for the third wicket, which took the game away from their opponents at the Gurgaon cricket ground.

However, when it looked like Taide, who is also having a purple patch in red-ball cricket, would score big, left-arm spinner Satyajeet Bachhav (1/68) dismissed the southpaw.

But that did not deter Satish from playing his shots all around the park.

Wicketkeeper Akshay Wadkar (35 not out off 76 balls; 6×4) played the perfect second fiddle to Satish, as the two forged a 75-run stand for the unbroken fourth wicket.

Rajkot: Right-arm pacer Gaurav Yadav bagged five wickets as Madhya Pradesh bundled our minnows Meghalaya for a meagre 61 on the opening day of their Ranji Trophy Elite Group A match.

In reply, MP, who had defeated a strong Gujarat side in their lung opener, ended the day at 141 for 2, for a lead of 80 runs.

It was Yadav (5/11) who wreaked havoc with the ball, as no Meghalaya batter provided resistance. Only two of them scored in double digits.

Meghalaya were reduced to 25 for 5 and could never resurrect their innings from there as the MP bowlers kept striking at regular intervals.

Then, one down batter Shubham Sharma (57 batting), who slammed a hundred in the lung opener, joined Rohera, as the two added 54 runs for the second wicket.

Sharma took the Meghalaya attack to task, as he struck seven boundaries.

Once Rohera fell, Sharma and Rajat Patidar (16 not out) held fort till stumps were drawn.