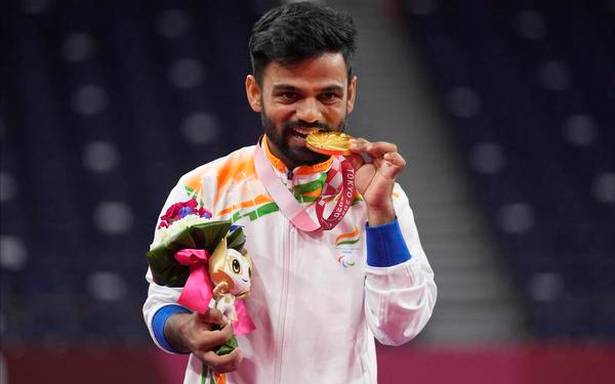 While Krishna Nagar secured a gold medal, Suhas Yathiraj claimed a silver in badminton at the Tokyo Paralympics

“Historic performance by Krishan Nagar. Strong and determined, you proved your mettle by winning the gold medal in badminton at #Paralympics and keeping the tricolour high. Your excellence is commendable. Many Indians will be inspired by you. Congratulations and best wishes, President Kovind wrote in his tweet.

Earlier in the day, bureaucrat-cum-shuttler Suhas Lalinakere Yathiraj won a historic silver becoming the first IAS officer to win a medal at the Paralympics. The Gautam Budh Nagar District Magistrate put up a great show in the men’s singles SL4 class final before going down against top seed Lucas Mazur of France.

Confluence of service and sports: PM Modi on Yathiraj

Prime Minister Modi also took to Twitter to share his congratulatory wishes for the shuttlers. He said Nagar’s achievement had brought smiles on every Indian’s face.

“Happy to see our Badminton players excel at the Tokyo #Paralympics. The outstanding feat of @Krishnanagar99 has brought smiles on the faces of every Indian. Congratulations to him for winning the Gold Medal. Wishing him the very best for his endeavours ahead. #Praise4Para,” the Prime Minister tweeted.

Yathiraj, who has been at the forefront in G.B. Nagar’s fight against COVID-19, also received praise from the Prime Minister as he described him as a fantastic confluence of service and sports who has captured the imagination of the entire nation.

“A fantastic confluence of service and sports! @dmgbnagar Suhas Yathiraj has captured the imagination of our entire nation thanks to his exceptional sporting performance. Congratulations to him on winning the Silver medal in Badminton. Best wishes to him for his future endeavours,” PM Modi tweeted.

“Heartiest congratulations to @Krishnanagar99 for winning gold in badminton at #Paralympics. Whole nation is proud of your exceptional achievement. My best wishes for future endeavours!” Mr. Naidu tweeted.

The Vice-President praised Yathiraj for his “on-court performances as a shuttler & off-court conduct as an able civil servant”.

“Heartiest congratulations to Suhas Yathiraj on winning #Silver in the Men’s Badminton Singles SL4 event at Tokyo Paralympics 2020.He has inspired many with his on-court performances as a shuttler & off-court conduct as an able civil servant. Best wishes for his future endeavours,” he tweeted.

“Great news from #TokyoParalympics that Jaipur, Rajasthan’s para-badminton player #KrishnaNagar has won a #Gold medal in men’s Para Badminton SH6 event! A Superb Achievement for which we are so very proud! A very Big Congrats to him for his stellar success!! @Krishnanagar99,” Mr. Gehlot said.

Union Minister for Youth Affairs and Sports Anurag Thakur also lauded the shuttlers for taking India’s medal tally to 19 on the last day.

“G O L D Krishna has aced and achieved the 1st Gold for India in the MS SH6 event at #Paralympics! Such a wonderful gift to your mentor Gaurav Khanna on this National Teachers Day. India is overjoyed!” he tweeted while congratulating Nagar.

“Congratulations to @KrishnaNagar99 for bagging another #Gold in #Badminton for India at #Tokyo2020. He was totally dominating in his game. I also congratulate Suhas Yathiraj for his #Silver and becoming the first ever serving Indian bureaucrat to win a medal at #Paralympics,” Mr Stalin tweeted.

Punjab CM Captain Amarinder Singh heaped praises on Yathiraj for keeping his interest in sports alive while serving as a bureaucrat.

“Congratulations to LY Suhas for winning Silver in Badminton in the Tokyo Paralympics. Extremely remarkable to have kept your interest in the sport alive along with your challenging career in the IAS. We are all very proud of you,” his tweet read.