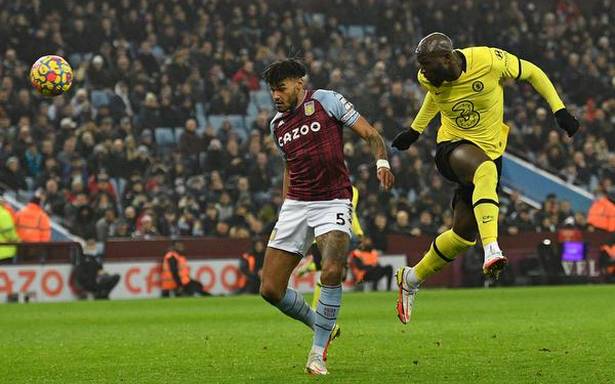 Ensures the team stays in the title hunt after a run of disappointing results; Maupay scores in Brighton’s much-needed victory

Romelu Lukaku came on to score his first Premier League goal since September to keep Chelsea in the title race as the European champion came from behind to beat Aston Villa 3-1.

Reece James’ own goal put Villa ahead, but Jorginho quickly levelled from the penalty spot in a clash between two of the many English sides hit by cases of coronavirus.

Lukaku was one of Chelsea’s absentees due to a positive test for draws against Everton and Wolves last week that saw it lose ground in the title race.

But he made his return off the bench at the break and made an almost instant impact to head home Callum Hudson Odoi’s cross.

Thomas Tuchel’s men move level on points with Liverpool, which has a game in hand, and back to within six of Manchester City.

Gerrard has made a big impression since taking over in November, but this was another lesson in the gap he has to bridge to the Premier League’s top three after defeats to City and Liverpool.

The home side got off to the perfect start when James flicked Matt Targett’s effort over his own goalkeeper Edouard Mendy to open the scoring on 28 minutes.

However, the lead lasted just six minutes due to Matty Cash’s rash challenge on Hudson-Odoi inside the area.

Jorginho was Chelsea’s top league scorer last season despite all of his goals coming from penalties and the Italian international is his side’s leading marksmen in all competitions thanks to nine spot-kicks this season.

Lukaku will expect that to change over the coming weeks as the club’s record signing finds his form after a disrupted start to his second spell at Stamford Bridge.

He is still yet to start in the Premier League since suffering an ankle injury in October, with his positive test for Covid coming just as he was returning to full fitness.

But a Lukaku in form is what Chelsea needs if it is to mount a serious title challenge with clashes against Liverpool and City to come in January.

The former Manchester United striker took just 11 minutes to make the difference as he timed his run perfectly to meet Hudson-Odoi’s cross and powered a header low past Emiliano Martinez.

Chelsea should have run out more a comfortable winner as Mason Mount dragged his shot wide with the goal gaping after rounding Martinez.

The Argentine then spread himself to deny Hudson-Odoi when one-on-one.

But the only way Ezri Konsa could stop Lukaku as he powered his way through the Villa defence late on was by hauling him down and Jorginho got the better on Martinez once more from the spot.

Neal Maupay struck a stunning goal against his former club as Brighton picked up a first Premier League win in 12 games by beating Brentford.

Maupay sent an unstoppable effort into the top right corner in the 42nd minute after Leandro Trossard had already volleyed Brighton in front.

Brentford had second-half opportunities to salvage something but was denied by a couple of superb saves from Brighton goalkeeper Robert Sanchez, while home defender Marc Cucurella cleared Ethan Pinnock’s header off the line.

Victory for Graham Potter’s side ended a poor streak stretching back to a 2-1 success over Leicester on Sept. 19, and it lifted the south coast team to ninth in the standings.

Brentford is three points behind in 13th place in its first Premier League campaign.