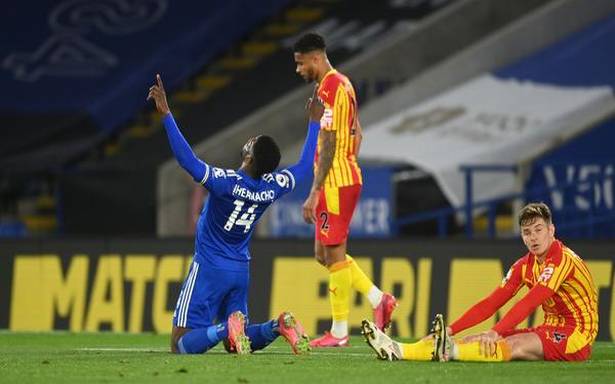 Jamie Vardy and Jonny Evans were also on target for the home side, who stayed third on 59 points from 32 games.

Red-hot striker Kelechi Iheanacho scored an 11th goal in his last eight games in all competitions as Leicester City poured more misery on woeful West Bromwich Albion with an emphatic 3-0 Premier League win at the King Power Stadium on Thursday.

Jamie Vardy and Jonny Evans were also on target for the home side, who stayed third on 59 points from 32 games, four clear of fourth-placed Chelsea and West Ham United and on course for Champions League qualification.

Second-bottom West Brom look as though they will be playing Championship football next season having been unable to make up ground on those above of them. They are nine points from the safety zone with six matches remaining.

FA Cup finalists Leicester did the hard work in the first half with a performance full of pace and guile, one that earns them a first Premier League win since a 5-0 home success against Sheffield United in mid-March.