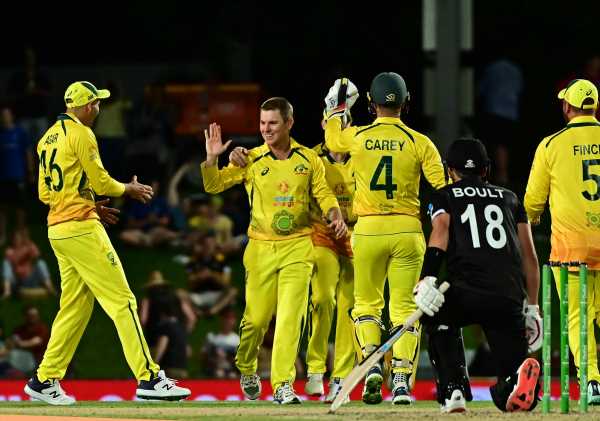 Australia legspinner Adam Zampa picked up his maiden five-wicket haul in one-day internationals to help the hosts defeat New Zealand by 113 runs in a low-scoring second match in Cairns and bag the Chappell–Hadlee Trophy with a game to spare.

Defending only 196, the Australian attack kept New Zealand batters under a tight leash with great line and length in helpful conditions for bowling, eventually skittling the visitors out for just 82 in 33 overs.

The early damage to New Zealand was caused by seamer Sean Abbott, who came into the side after all-rounder Cameron Green was ruled out due to the cramps he suffered during his match-winning effort in the first ODI.

After Mitchell Starc dismissed Martin Guptill in the opening over of the innings, Abbott sent back Devon Conway and Tom Latham in his first over and conceded only a single run in his spell of five overs.

New Zealand were reduced to 14-3 and their hopes depended heavily on captain Kane Williamson but he was out cheaply, trapped leg before wicket off a full toss delivery from Zampa.

The legspinner then ran through the New Zealand middle order and tailenders to finish with figures of 5-35. Earlier, pace duo Trent Boult and Matt Henry shared seven wickets between them to restrict Australia to 195 for nine after Williamson won the toss and opted to field in the must-win match, having lost the first ODI by two wickets.

Australia’s top and middle order batting crumbled once again as Boult, who picked up 4-38, and Henry reduced them to 54-5. Australia captain Aaron Finch’s horrid run of form with the bat continued as he was out without scoring on the second delivery he faced. The opening batter has now scored 26 from his last seven innings, all in ODIs, in which he has led the side to five wins and two losses.

Steve Smith was the only one among the recognised batters to provide some resistance with a knock of 61 before some solid rearguard action from the Australian tailenders.

Starc, who made an unbeaten 38, Zampa and Josh Hazlewood propped up Australia, who had been reduced to 117-8 at one stage, by adding 78 for the last two wickets.

The third and final ODI will be played at the same venue on Sunday.