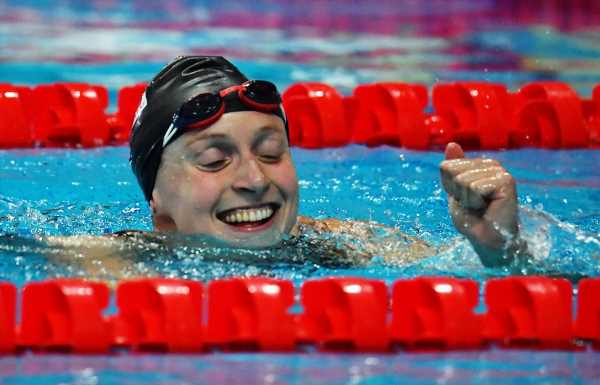 Katie Ledecky was already the most successful female swimmer coming into the World Championships and now has 19 medals in total.

Olympic silver medallist Katie Ledecky powered to victory in the women’s 400 metres freestyle event on the opening day of the swimming World Championships in Budapest on Saturday to capture a record-extending 16th gold medal in the competition.

Ledecky, 25, was already the most successful female swimmer coming into the World Championships and now has 19 medals in total. Only her male compatriots Michael Phelps (26 titles) and Ryan Lochte (18) have won more gold medals.

Ledecky took full advantage of the absence of reigning world and Olympic champion Ariarne Titmus of Australia to reclaim her title with a time of three minutes and 58.15 seconds, finishing ahead of Canadian 15-year-old Summer McIntosh, who took silver. “It feels good. It’s the fastest I’ve ever been at worlds so I’m really happy with that and really excited about the rest of the week I have ahead of me,” Ledecky told Olympics.com.

“Summer is now in the sub four-minute club so it’s only going to get harder. I know I have my work cut out for me.”

Titmus, who set the world record of 3:56.40 at her national championships last month to eclipse Ledecky’s mark, denied fans another showdown with her rival after opting to skip the worlds to prepare for next month’s Commonwealth Games in Birmingham.

Ledecky was on course to reclaim the record halfway through her race before her pace dropped slightly, but she staved off a strong challenge from McIntosh to claim a fourth world title in the event having settled for silver in 2019. The US men’s 4x100m freestyle team briefly threatened to break the world record but eventually finished 1.1 seconds shy of the mark to bag the gold, finishing in three minutes 9.34 seconds.

The team of Caeleb Dressel, Ryan Held, Justin Ress and Brooks Curry pipped Australia to top spot while Italy came in a close third, losing out on the silver medal by 0.15 seconds.

The Australian women’s team, however, did not disappoint as the reigning Olympic champions won gold in the same event, beating Canada and the US by more than a second.

The team of Mollie O’Callaghan, Madison Wilson, Meg Harris and Shayna Jack finished with a time of 3:30.95. The 22-year-old finished in 3:41.22 seconds, going 1.63 seconds faster than Germany’s Lukas Martens, who claimed silver at the Duna Arena.

“I tried to have fun in the pool and enjoy this whole experience,” Winnington said after setting the third-fastest time at the world championships.

“In the last call room I’ve heard the noise, the MC’s (master of ceremonies) voice and it was a total boost for me. I haven’t had this feeling for a long time.”

Brazil’s Guilherme Costa took the bronze while Austria’s Felix Auboeck, who dominated the heats earlier in the day, could only manage fourth despite a solid start. Frenchman Leon Marchand won the 400m medley with a championship record time of four minutes 4.28 seconds to beat Americans Carson Foster and Chase Kalisz to the top of the podium and claim his first world title.

The world championships, originally scheduled to take place in Fukuoka, Japan before being shifted to the Hungarian capital due to COVID-19 concerns, will run until July 3.