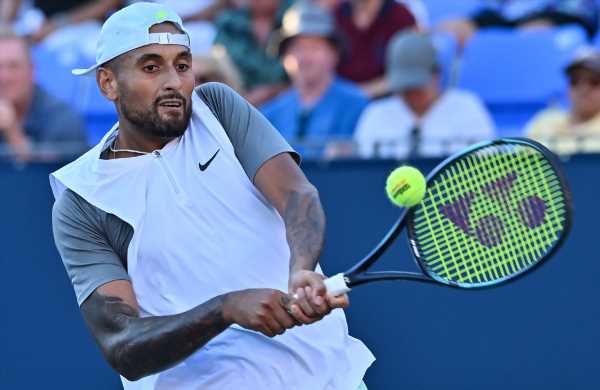 The fiery Wimbledon finalist has been playing the best tennis of his career and is showing no signs of slowing down in Montreal, where he won the first four games of the opening set in which de Minaur won scarcely more than half of his first-serve points.

The pair traded breaks to open the second set but 27-year-old Kyrgios would not be denied, breaking de Minaur on the third try in the third game and again in the seventh.

Kyrgios briefly appeared agitated when he gave up a break in the penultimate game but found his composure to get the job done in a little over an hour, breaking back to love in the final game. The win will move Kyrgios high enough in the rankings to be seeded at the US Open later this month.

“I did what had to be done. He’s a hell of a player if you play to his strengths, he’s one of the best players from the back in the game, he’s just so fast,” Kyrgios said of de Minaur in on-court remarks after the match.

Kyrgios has won 15 of his last 16 matches and a day earlier produced a serve-and-volley masterclass to stun Medvedev 6-7(2), 6-4, 6-2. He said the effort had certainly taken a toll.

“Today was really hard for me mentally to play Alex, we’re such good friends and he’s been having such a good career so far carrying the Australian flag. It’s just tough mentally, it’s never easy to play a friend like that, especially if they’re an Australian.”

Kyrgios next faces Poland’s Hubert Hurkacz in the quarter-final round.

In other matches, Felix Auger-Aliassime harnessed his mighty serve to down Briton Cameron Norrie 6-3, 6-4 to delight his home crowd, while Norwegian Casper Ruud outlasted Roberto Bautista Agut in a closely-fought three sets. Competing in his local town of Montreal, the 22-year-old Auger-Aliassime sent over 15 aces and won all but three of his first-serve points, breaking in the penultimate game of both sets on Centre Court.

British number one Norrie made five double faults and never had the momentum against a clinical Auger-Aliassime, who collected his first ATP title in Rotterdam this year and wrapped up Thursday’s affair in a tidy 72 minutes.

“Montreal people are really proud people,” Auger-Aliassime was quoted as saying by the ATP, crediting the crowd with helping his performance.

“We are a small community in the world. We support each other in what we do, especially in professional sport.”

Briton Daniel Evans fought back after a disastrous second set to overcome American Taylor Fritz 7-6(5), 1-6, 7-5, producing a remarkable defence as he fended off a dozen break points.

Britain’s Jack Draper advanced after France’s Gael Monfils retired in the second set with what appeared to be an injury to his right ankle. Polish world number one Iga Swiatek was stunned by Brazil’s Beatriz Haddad Maia 6-4, 3-6, 7-5 at the Canadian Open on Thursday, while Jessica Pegula beat holder Camila Giorgi to join Coco Gauff and Simona Halep in the quarter-finals.

In the opening set of their last-16 clash, Swiatek struck a double-fault to hand the unseeded Haddad Maia a 3-2 lead and the Brazilian leaned on her powerful serve and groundstrokes to close out the frame without facing a break point.

Swiatek fended off five break points to hold serve in a 15-minute opening game of the second set and later consolidated a break for a 5-2 lead before going on to force a decider.

World number 24 Haddad Maia broke Swiatek three times in the third set, including in the final game on her fourth match point when the Pole sent a forehand wide.

“I knew that all the matches here would be very tough, not only top 20 players, like the first round was a very, very tough round and I won in three sets as well,” 26-year-old Haddad Maia said during her on-court interview.

“Tennis is like that. It doesn’t matter where you are playing, which court and with who. You need to push yourself to improve your game and I think that was the key for both (of my three-set) victories and I am very proud of myself.”

French Open champion Swiatek, who had a run of 37 straight wins halted in the third round at Wimbledon last month, said she struggled with the windy conditions.

“Next time maybe I’m going to be able to find, even though the conditions are going to be bad, more solutions and just play more solid. Because I did a lot of mistakes that I kind of don’t accept,” she told reporters.

Haddad Maia will play either Spanish eighth seed Garbine Muguruza or 12th seed Belinda Bencic of Switzerland in the last eight of the US Open tune-up event. “These type of matches, the goal, yeah, to win the tournament. But I feel like for me I needed these matches leading up into the US Open,” said Gauff. “So if I have a tough moment, I can look back on this.”

With the win over Sabalenka, Gauff becomes the youngest player to reach back-to-back quarter-finals in Canada since Jennifer Capriati in 1990 and 1991. Zheng Qinwen kept her breakthrough year on track, quieting the home crowd on Centre Court with a 7-5, 5-7, 6-2 win over Canada’s Bianca Andreescu.

The Chinese 19-year-old, who reached the fourth round at Roland-Garros earlier this year, next faces Karolina Pliskova, who fired down 10 aces on the way to a 6-1, 6-7(9), 6-3 win over Greek powerhouse Maria Sakkari.