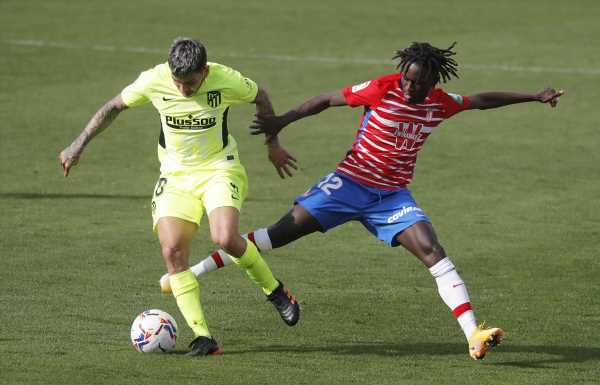 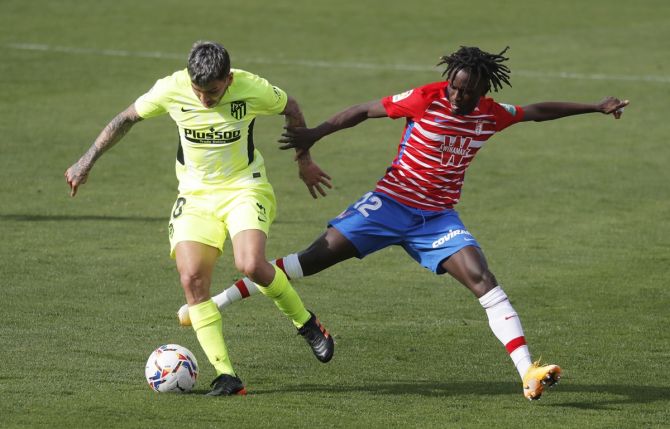 A heavily deflected strike from Angel Correa saw La Liga leaders Atletico Madrid snatch a 2-1 victory away to Granada on Saturday to get back to winning ways and move eight points clear at the top of the standings.

Marcos Llorente put Atletico in front in the 63rd minute with a low finish from the edge of the area.

But the visitors’ joy was short-lived as Venezuelan midfielder Yangel Herrera equalised for Granada three minutes later following a corner, his shot flying into the net after bouncing off Llorente’s trailing leg.

Atletico appeared on course to drop points for a second consecutive game after Monday’s 2-2 draw at home to Celta, which would have offered Real Madrid the chance to close the gap with them to three points if they beat Valencia on Sunday.

But Atletico regained the lead in the 75th when Argentine forward Correa tried his luck inside the box and saw his desperate attempt bounce off the foot of Granada defender Jesus Vallejo and loop over keeper Rui Silva into the net.

Diego Simeone’s side moved on to 54 points after 21 games, eight clear of second-placed Real and with a game in hand.

“We knew we had to keep our composure in the area, we were creating a lot of chances and we knew the goal was going to arrive sooner or later,” said match-winner Correa.

“We had drawn our last game and we wanted to get the three points against a good side, so we leave here feeling very happy because we did just that.

“All we can do is focus on ourselves and think about improving because today we conceded another goal and we have to try and stop that happening.” 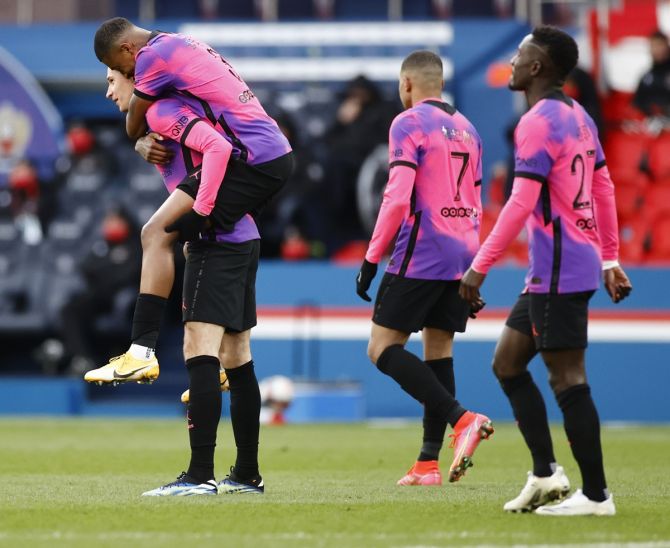 Paris St Germain geared up for their Champions League trip to Barcelona with a 2-1 home win against Nice that sent them provisionally top of the Ligue 1 standings on Saturday.

Italy striker Moise Kean netted the winner after Rony Lopes’s 50th-minute goal had cancelled out Julian Draxler’s opener for PSG in the first half.

The French champions are on 54 points from 25 games and lead Lille, who host Brest on Sunday, on goal difference with Olympique Lyonnais in third place on 52 points.

The result left Nice in 13th place with 29 points from 24 matches.

PSG, who face Barca in their Champions League last-16 first leg on Tuesday, were without three key players with Neymar and Angel Di Maria injured while Marco Verratti was nursing a knock he sustained in a 1-0 French Cup win at Caen on Wednesday.

The Italian was replaced by Draxler, who lived up to the task as he drove the ball home from close range after Mauro Icardi’s attempt had bounced off the post into his path in the 22nd minute.

Nice, however, stepped up a gear after the break and Lopes equalised with a powerful shot under the crossbar following a rare poor clearance by Marquinhos.

The visitors went close to taking the lead on the hour but Amine Gouiri’s attempt crashed against the bar.

Kean punished them in the 76th minute, heading home from point-blank range to give PSG all three points after Icardi had stretched in the air to deflect Kylian Mbappe’s cross.

Borussia Dortmund striker Erling Haaland scored an 81st-minute equaliser to rescue a 2-2 draw against visitors Hoffenheim on Saturday as they lost further ground in their battle for a top-four finish.

Norway international Haaland pounced on a Hoffenheim mistake to race through and netted his 15th goal of the campaign after Hoffenheim had come from a goal down to lead 2-1.

Dortmund, who travel to Sevilla on Wednesday for their Champions League Round of 16 first leg, have managed just one win in their last six league games.

The Ruhr valley club is in sixth place on 33 points, three off fourth-placed Bayer Leverkusen, who wasted a two-goal lead to draw 2-2 with Mainz 05.

Eintracht Frankfurt on 36 points, and Borussia Moenchengladbach, on 32, are in action on Sunday against Cologne and VfL Wolfsburg respectively.

Hoffenheim’s Ilhas Bebou twice failed in a one-on-one with Dortmund keeper Marwin Hitz as the visitors looked livelier than the hosts.

Instead it was Jadon Sancho who scored to put Dortmund in front in the 24th minute.

Dortmund’s sloppy defending then allowed Munas Dabbur to slip into the box and finish a Sebastian Rudy pass for the equaliser seven minutes later.

Bebou then made amends for his earlier misses, heading in a ball that bounced off Hitz’s hands onto his head as the keeper unsuccessfully attempted to clear a cross in the 51st.

Dortmund had to wait until Haaland’s equaliser nine minutes from the end to rescue a point but pressure will be mounting on coach Edin Terzic who has so far failed to turn their season around following the sacking of his predecessor Lucien Favre.

Champions Bayern Munich, in top spot on 48, host Arminia Bielefeld on Monday after winning the Club World Cup on Thursday.