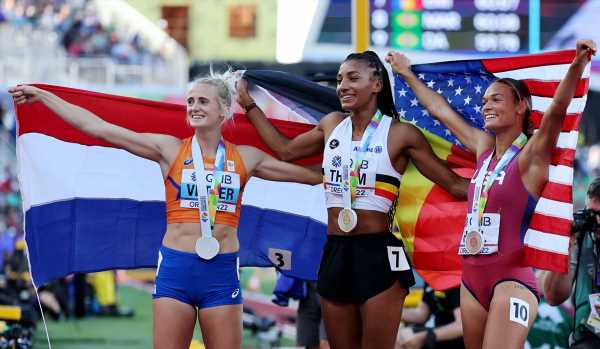 Images from the World Athletics Championships in Eugene, Oregon, on Monday, Day 4.

Belgium’s double Olympic champion Nafissatou Thiam reclaimed the World heptathlon title in emphatic style on Monday when she produced a personal best in the final 800 metres to see off the challenge of Dutch rival Anouk Vetter.

Vetter, who won silver behind Thiam in Tokyo last year, had gone into the final event 19 points ahead, equating to 1.3 seconds over 800m, but her personal best was more than two seconds slower than Thiam’s.

She was never able to pose a serious threat though, looking tired from the start, while Thiam showed her class by posting a massive personal best by more than two seconds of 2:13.00 to claim a second world gold after 2017.

“I worked really hard on the 800 so knew I could do a good time but think I needed that extra push of someone behind me,” Thiam said.

Thiam had lead at the end of Sunday’s action as she tallied her best-ever first day’s points total.

Vetter hit back with a personal best long jump and a strong javelin on Monday morning to edge into that slender lead.

American Anna Hall, 21 and a great prospect for future titles, took bronze and also had the pleasure of being cheered home as the winner of the 800m.

Britain’s defending champion Katarina Johnson-Thompson, who edged out Thiam in the 2019 worlds, was below-par throughout and finished eighth. Reigning World champion Noah Lyles showed he is no mood to give up his 200 metres crown after setting a red-hot pace to win his heat on Monday.

The sprinting showman rounded the curve with ease before wagging his finger at the rest of the field down the straight to finish in 19.98 seconds and advance to Tuesday’s semi-finals.

Celebrating his 25th birthday, Olympic bronze medallist Lyles said he had jitters during the three-day wait to compete in front of the home crowd in Eugene, Oregon.

His rivalry with fellow-American Erriyon Knighton is expected to produce fireworks.

Lyles denied the 18-year-old a place on the podium at the Tokyo Olympics and ran past him down the stretch to clinch the national championship last month, prompting Knighton to storm off during a post-race interview.

Knighton got off to an explosive start on Monday before easing up near the halfway mark and cruising to victory in his heat in 20.01s.

“I cannot ask for more, I am at the spot where I want to be,” said Knighton. “One of my best years, if not my best and I am just happy.”

Alexander Ogando, who helped the Dominican Republic pick up gold in the 4x400m mixed relay on Friday, equalled Knighton’s time in his heat, cruising past the US Olympic silver medallist Kenny Bednarek down the straight.

Two days after leading an American sweep of the 100m, Fred Kerley jogged through to the finish to win his heat but said he was “still in recovery mode”.

Canadian Andre De Grasse, the Olympic champion who took silver at the worlds three years ago, withdrew from the 200 after failing to qualify for the 100m final on Saturday.

Another Canadian, Aaron Brown, stumbled and fell forward after his blocks slipped but was issued a green card and allowed to run, finishing second in his heat behind 400m indoors champion Jereem Richards of Trinidad and Tobago. 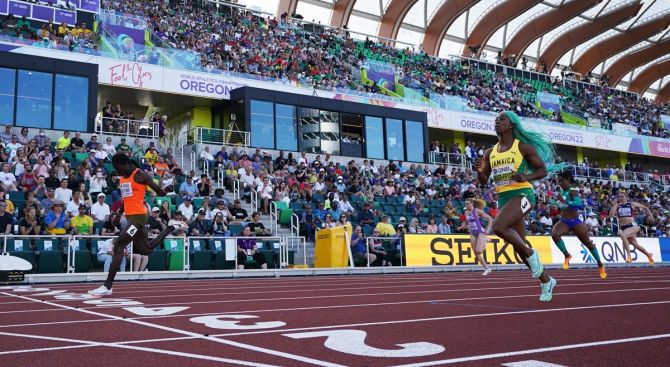 In the women’s heats, Jamaica’s terrific trio of Shelly-Ann Fraser-Pryce, Shericka Jackson and Elaine Thompson-Herah rolled through to the semi-finals less than 24 hours after sweeping the 100m podium.

“Oh man, it was hard,” said Fraser-Pryce, who collected her fifth world 100m gold on Sunday. “It was a late night and I needed to come back and try to qualify as easy as I can to preserve my strength for tomorrow.

“Just have to go home and get some recovery done and see how it goes tomorrow.”

Making her debut at the World Championships, home hope Abby Steiner won her heat comfortably in 22.26s. Steiner posted the second-fastest time of the year at nationals on the same springy Hayward Field track last month.

Niger’s Aminatou Seyni and Namibian Beatrice Masilingi, who are barred from their preferred 400m event due to World Athletics’ “Differences of Sexual Development” rules, advanced to the semi-final with Seyni producing the fastest time (21.98). 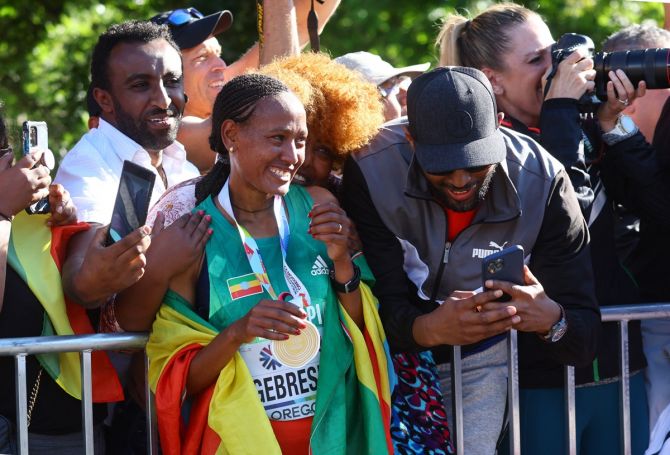 The Ethiopian broke away with about two kilometres to go and never gave Korir a chance down the final stretch to cross finishing line two hours, 18 minutes and 11 seconds, smashing Briton Paula Radcliffe’s previous mark of 2:20:57s, set in 2005.

It was Ethiopia’s second marathon triumph in Eugene, Oregon, after Tamirat Tola won the men’s title in another Championship record 2:05:36s.

Korir, who produced the fastest time of her career, said she was frustrated that Gebreslase did not want to pace with her after they pulled away around the 27-km mark but was nonetheless pleased with her performance.

“The Ethiopian runners are very fast. It not easy to run with them, but I tried my best,” she said.

The field produced a speedy start at 6.15 am local time, benefiting from sunny but pristine conditions, with temperatures hovering above 50 degrees Fahrenheit (10C).

Israeli Lonah Salpeter seized a chance to secure third spot on the podium after Ethiopian Ababel Yeshaneh fell off the leading pack and dropped out with less than 10 km to go.

Kenyan Ruth Chepngetich, who won three years ago, dropped out at around the 18-kilometre mark due to stomach issues.