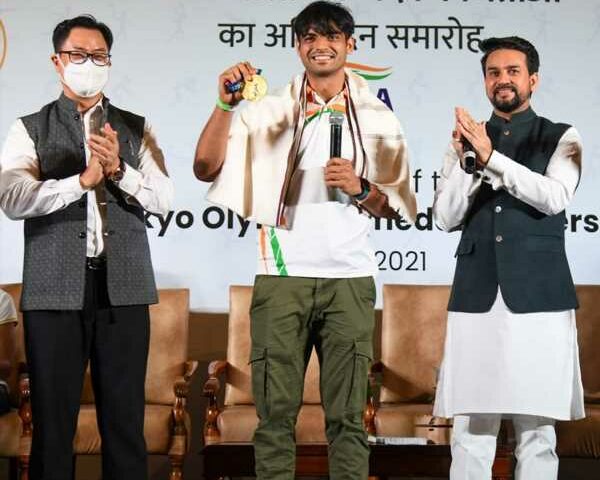 Images from the felicitation for India’s Tokyo Olympics medal-winners, in Delhi, on Monday.

India’s Olympics medal-winners were accorded a grand welcome by the government at a dazzling felicitation ceremony in Delhi on Monday, with Sports Minister Anurag Thakur saying their journey is an “incredible story of resilience and sporting excellence”.

Gold medal-winning javelin thrower Neeraj Chopra was the cynosure of all eyes at the function at a five-star hotel, held a couple of hours after the seven podium finishers made their way out of the airport amid utter chaos.

They were presented mementos and shawls by the minister. 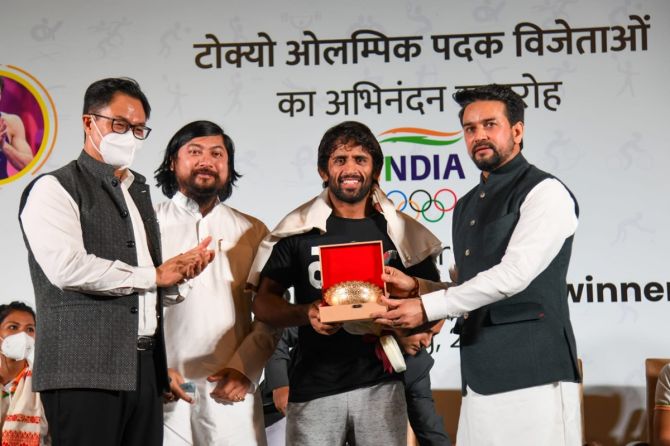 While Chopra added the golden sheen to the campaign, the silver medals came from weightlifter Mirabai Chanu and wrestler Ravi Kumar Dahiya.

“I am very happy to be back home. I knew India is very happy, but after coming back here, to get this love first hand, it feels really nice. I would try to do my best for more such medals,” Borgohain said.

Sindhu and Chanu did not attend the ceremony as they arrived earlier and are currently at their home bases.

“I only tried to give my best,” said Punia, who fought through his semi-final without any protective gear on his injured knee. 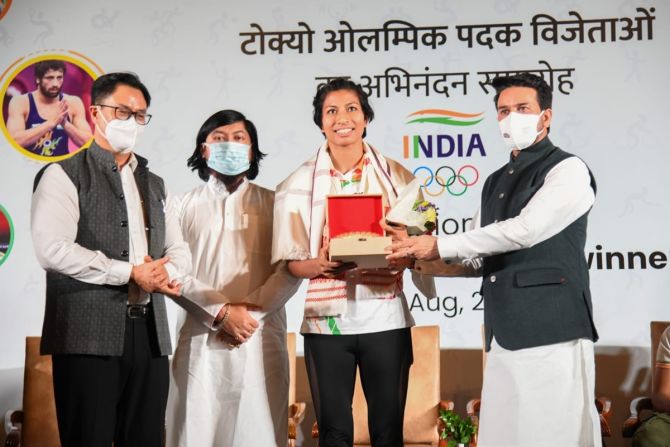 Among those present on the occasion to felicitate the medal winners also included Union Minister of Law and Justice Kiren Rijiju, Secretary (Sports) Ravi Mittal and Director-General of Sports Authority of India Sandip Pradhan.

“Tokyo 2020 was an Olympic Games of many firsts for India. The success of Team India at the Olympics is a reflection of how New India desires and aspires to dominate the world…even in sports,” Thakur said.

“The Olympic Games showed us that with self-discipline and dedication we can be champions. Team India excelled and inspired while Indians cheered and celebrated all around.

“Truly sports is a great unifier as our athletes come from villages and cities, north to south, from east to west. Their journey is an incredible story of resilience and sporting excellence,” he added.

There were many firsts in India’s campaign, including the biggest ever 128-member athlete contingent, seven Olympic Medals, first Olympic gold medal in an athletics event, two successive medals in consecutive Games by Sindhu, and a medal(bronze) by the Indian men’s team in hockey after a gap of 41 years.

Also, the women’s hockey team achieved its best ever fourth place finish in the Games.

“We will continue to support our sports persons and we endeavour to make India a sporting powerhouse,” Thakur said.

The minister also lauded some close finishes including the fourth-place finish by golfer Aditi Ashok.

Thakur’s predecessor Rijiju praised the performances of all the athletes and reiterated that India will be a force to reckon with by the 2028 Olympics.

“This is just the beginning because India’s resurgence in sport is visible now and I am confident that by 2028 Olympics India will be a force to reckon with,” Rijiju mentioned.