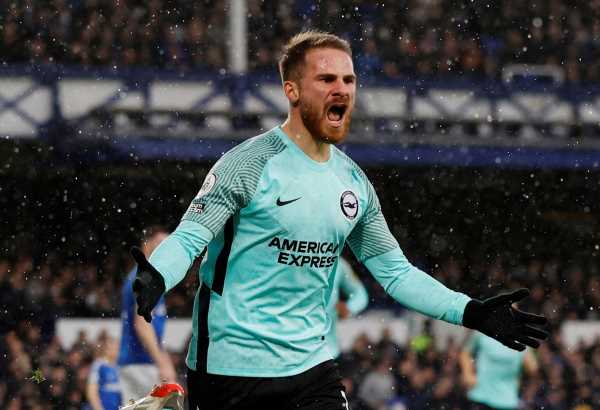 Images from Sunday’s action in the Premier League.

Brighton took an early lead at Goodison Park after midfielder Mac Allister scored in the third minute, finishing off a brilliant team move with a first-time shot past Everton goalkeeper Jordan Pickford.

Burn netted the second goal in the 21st minute after the centre back, unmarked at the back post, nodded in Enock Mwepu’s flick-on from a free-kick.

Everton were awarded a lifeline four minutes later when a foul by Mwepu on Anthony Gordon led to a penalty, but Dominic Calvert-Lewin clipped the crossbar from the spot in his first appearance since August following an injury layoff.

Gordon finally pulled one back for the hosts in the 53rd minute after he cut inside from the right and fired a left-footed shot which took a huge deflection off Brighton’s Adam Lallana.

Mac Allister scored his second goal in the 71st minute with a volley from outside the penalty area.

Gordon added a second goal shortly afterwards but Everton could not turn the match around, with an eighth defeat in their last 12 league games. Late goals from Stuart Dallas and substitute Daniel James earned Leeds United a crucial 3-1 victory over Burnley on Sunday, a win that moved the home side eight points clear of the Premier League relegation zone.

Leeds had not played since December 18 prior to Burnley’s visit due to coronavirus-related postponements, and that additional break allowed them to get some much-needed key players back from injury.

The hosts looked sharper from the off and dominated the first half, deservedly leading at the interval after Jack Harrison found the net in the 39th minute from a tight angle.

The introduction of top goalscorer Maxwel Cornet at the break gave Burnley much more potency in attack, with the Ivorian firing in a free kick from 25 metres out to stun Elland Road into silence in the 54th minute.

With the pressure on, Dallas came up with the pivotal second goal for Leeds from the edge of the penalty area 13 minutes from time to spark wild scenes of celebration.

As the visitors pressed for a leveller, James’s stoppage-time header sealed a first win in five league games for Leeds, who stayed 16th on 19 points, eight clear of 18th-placed Burnley, who have won just once all season. Mads Roerslev scored his first goal for Brentford to give them a comeback 2-1 home win over Aston Villa in the Premier League on Sunday after Yoane Wissa had cancelled out an early Danny Ings opener for the visitors.

Ings had a 12th-minute shot blocked before he fired Villa ahead four minutes later with a crisp finish into the far corner, having been put through by a defence-splitting pass from Emiliano Buendia.

French-born Congo forward Wissa levelled in the 42nd when he took the ball in his stride and planted an unstoppable left-footed effort past visiting goalkeeper Emiliano Martinez from the edge of the penalty area.

Buendia fired inches wide from long range in the 54th minute and Frank Onyeka also came close for the home side in the 75th, when Martinez tipped his low shot on to the outside of the post.

Brentford’s second-half pressure paid off in the 83rd minute when Roerslev beat Martinez at the second attempt, drilling in his own rebound after the keeper had palmed the initial shot straight back into the Danish midfielder’s path.

Ings missed Villa’s final chance to salvage a draw when home keeper Alvaro Fernandez kept out his close-range effort in the closing stages. The result lifted Brentford into 12th place on 23 points from 19 games, one point ahead of 13th-placed Villa.