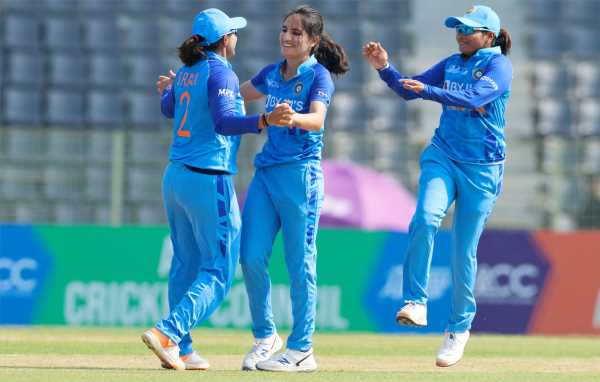 Images from the Women’s Asia Cup T20 final between India and Sri Lanka in Sylhet, Bangladesh on Saturday.

Pacer Renuka Singh led the way with a three-wicket haul as India limited Sri Lanka to a paltry 65/9. In reply, Mandhana smashed an unbeaten 51 from 25 balls as a dominant India raced to victory with 11.3 overs to spare.

Having elected to bat, Sri Lanka were dealt an early as captain Chamari Athapaththu was run out by Renuka for six in the third over. Sri Lanka were rocked further as they lost three wickets in the fourth over, with Renuka dismissing Harshitha Madavi (1) and Hasini Perera (0) while Anushka Sanjeewani was run out by Pooja Vastrakar for 2.

Renuka then bowled Kavisha Dilhari for one to leave Sri Lanka reeling on 16/5 in six overs at the end of Powerplay. Spinners Rajeshwari Gayakwad and Sneh Rana chipped away at the wickets in the middle overs as the duo claimed two wickets apiece.

No 10 Inoka Ranaweera hit an unbeaten 18 from 22 balls while putting 22 runs for the last wicket with Achini Kulasuriya to save Sri Lanka the blushes after they were reeling on 43/9 in the 16th over.

Oshadi Ranasinghe (13) was the only Sri Lankan batter to score in double digits.