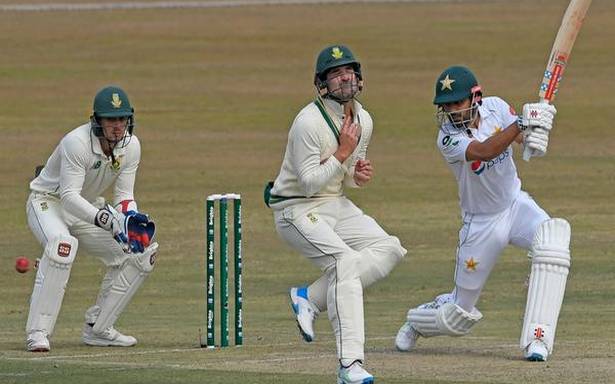 Skipper Babar Azam (77 batting) and in-form Fawad Alam (42 batting) helped Pakistan, which elected to bat, fight back as the opening day of the second Test was cut short by rain on Thursday.

Pakistan recovered from a precarious 22 for three to 145 for three in 58 overs at close of play.

Pakistan, electing to bat, reached 21 without loss before throwing away three wickets for one run in the space of 23 balls.

Spinner Keshav Maharaj, brought into the attack in just the ninth over, had opener Imran Butt caught behind for 15 and then trapped senior batsman Azhar Ali leg-before for nought in his next over.

Nortje then produced a sharp rising delivery to Abid Ali, whose fended push was caught smartly at short-leg by Aiden Markram.

Pakistan lead the two-match series 1-0 after winning the first Test in Karachi by seven wickets.