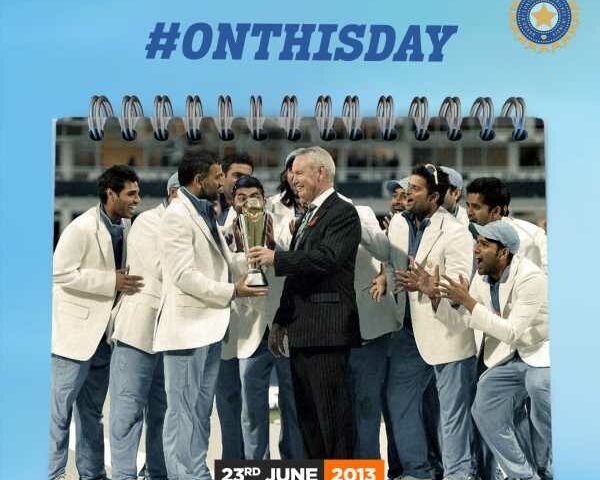 June 23, 2013 is a landmark day not just for Indian cricket but also for Mahendra Singh Dhoni.

It was on this day that the MS Dhoni-led team beat England by five runs in a rain-curtailed final in Birmingham to win the ICC Champions Trophy.

The final was an opportunity for England to win their first global one-day title but they suffered a huge batting collapse in the rain-affected one-day game.

After frustrating showers reduced the final to 20-overs-per-side, India posted 129 for seven and then restricted England to 124 for eight in a topsy-turvy game that went down to the wire.

Jadeja shone with bat and ball, hitting a quick 33 not out in the closing overs before bagging two wickets for 24 runs.

The sizeable Indian crowd erupted in joy when Ravichandran Ashwin (2/15) completed the final over, with James Tredwell unable to hit the required six off the last delivery.