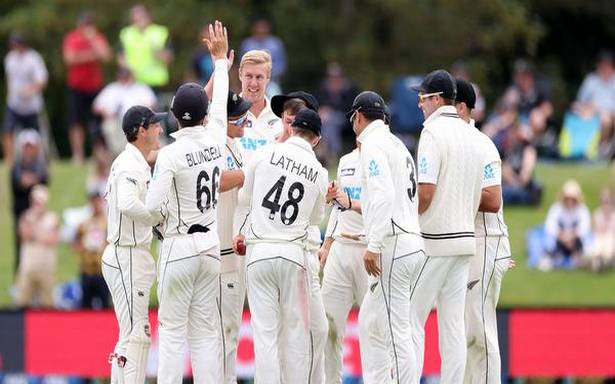 Jamieson had assistance in his dismissal of Abid from substitute fielder Will Young, who took a brilliant diving catch at short backward point.

Paceman Kyle Jamieson took his second five-wicket haul of the match, his fourth in only 11 test innings, to bowl New Zealand to the brink of victory over Pakistan at tea Wednesday on the fourth day of the second test.

Pakistan was 134-7 at the interval, still 228 runs behind New Zealand after trailing by 362 runs on the first innings. Fawad was 21 not out and Zafar Gohar had yet to score.

The tall blonde fast bowler has been an outstanding performer with both bat and ball since his debut against India in February last year.

At first considered a batsman who bowled occasionally, Jamieson has developed his bowling and has become a terror to visiting batsmen for his ability to achieve bounce on New Zealand pitches and to swing the ball both ways. Chosen as a bowler, he quickly revealed all-round abilities.

He had scores of 44 and 49 in his first two innings in tests and took 5-45 in his second test against India.

Returning to the New Zealand team this season, he scored an unbeaten 51 in the first test against the West Indies and took 5-34 in the first innings of the second test.

Jamieson claimed his first wicket of the second innings late on the third day, dismissing opener Shan Masood for his second duck of the match as Pakistan ended the day 8-1.

Jamieson had assistance in his dismissal of Abid from substitute fielder Will Young, who took a brilliant diving catch at short backward point.

He has been especially effective against left-handers and was again when he angled a delivery across Sohail who ran the ball off the face of the bat to wicketkeeper B.J. Watling.

Azhar had been solid in making 37 until Jamieson went round the wicket and the right-hander followed a ball down leg, feathering a catch to Watling.

Rizwan’s was a magnificent dismissal, an in-swinging yorker which beat the Pakistan captain’s late defensive shot.

Boult dismissed Fawad Alam (16) close to tea to leave New Zealand three wickets away from a win which will follow its two innings victories over the West Indies this home summer and its 101-win in the first test against Pakistan.