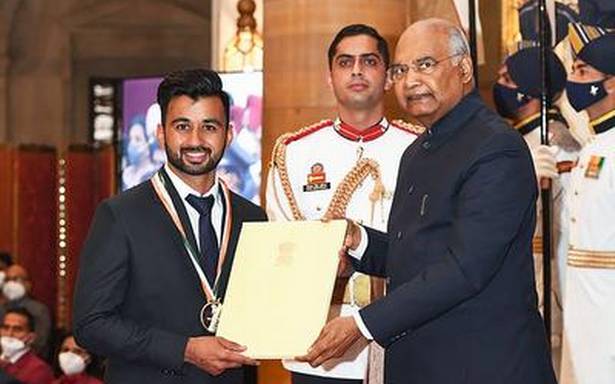 Olympic gold medallist Neeraj Chopra led the star cast at the National Sports Awards presentation ceremony but para-athletes stole the show at the Durbar Hall of Rashtrapati Bhawan on Saturday.

Neeraj was among the 12 recipients of the Major Dhyan Chand Khel Ratna Award from the President Mr. Ram Nath Kovind The award carries a medallion, a certificate and ₹25 lakh.

Each time the name of a para-athlete was announced, the large gathering that included Sports Minister Anurag Thakur, cheered loudly.

Khel Ratna recipient Krishna Nagar, gold medallist in para badminton in the Tokyo Paralympics this year, could not attend the function. He rushed back home on Friday night on receiving the news of the passing away of his mother.

The loudest cheers were reserved for Sajjan Singh (wrestling) and Davinder Singh Garcha, a member of the 1980 Olympic hockey gold winning team, when their names were announced to receive the Dhyan Chand award.