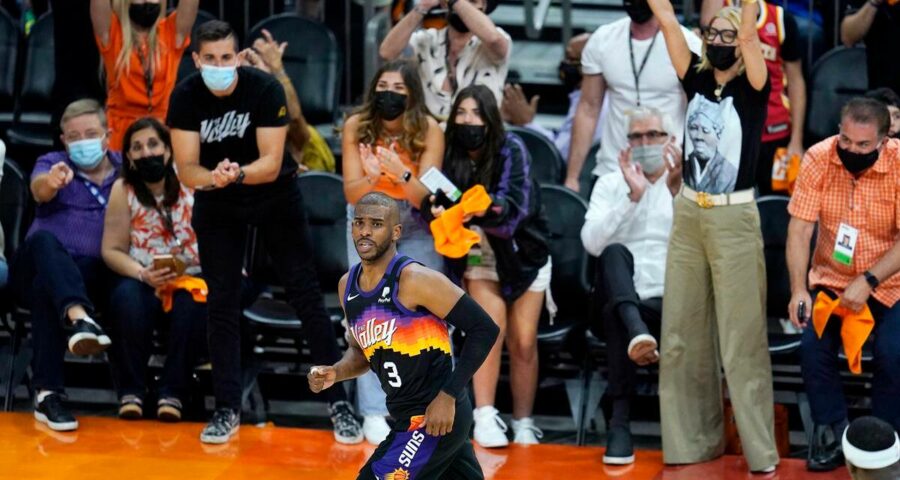 Chris Paul turned back the clock to sink in 32 points and make nine assists, as the Suns recorded a 118-105 win. It took Chris Paul 16 years to make it to the NBA Finals for the first time in his career. But when the 36-year-old took to the Phoenix Suns Arena court for Game 1 against the Milwaukee Bucks, he turned back the clock to sink in 32 points and make nine assists, as the Suns recorded a 118-105 win.

Paul, nicknamed ‘Point God’ for his ability to read defences, exploit switches and his awareness for player positioning was on full display in his first NBA Finals appearance. He made 12 of his 19 shots, which included four three-pointers from seven attempts. Half of his 32 points came in the third quarter where he scored six of seven field goals.

Coming into the Finals, only two players aged 36 or above had scored over 30 points in a game with a 60 percent shooting success rate. Paul now joins the illustrious club that includes the great Kareem Abdul-Jabbar and Tim Duncan – winners of six and five NBA titles respectively. Paul though, who stands at six-feet tall, is the only point-guard in that list.

Game 1 was won and lost in the Bucks’ inability to guard Paul and shooting guard Devin Booker on isolation (one-on-one) plays. According to ESPN Stats and info data, both of them were 12-19 when playing one-on-one against a Bucks player.

Some of those plays started with the Suns exploiting the Bucks’ switching schemes – when defenders were moving to mark a different opponent. Both Paul and Booker routinely targeted Bobby Portis, a 6-foot-10 centre who could only look on as Paul would blow by him and hit layups.

A crucial part of this series hinges on the Bucks’ star-player Giannis Antetokounmpo. The Greek centre – a two-time MVP – was struggling with a hyper-extended knee injury and was doubtful ahead of Game 1. But the Bucks played him and the seven-footer scored 20 points and made 17 rebounds – numbers that are lower than his usual scoring averages through this NBA season and playoffs.

On the other hand, Giannis’ free throws were their usual erratic self and it did not help that the rest of the Bucks simply couldn’t earn enough trips to the line. Giannis attempted 12 of the Bucks’ 16 free throws, making seven of them while two more were added by the rest of his team.

This was in comparison to the Suns, who scored 25 of 26 free throws. The home team in fact have scored 87 percent free throws since the Playoff stage this season – the highest by any team in NBA Playoff history with a minimum of 10 games, according to Statmuse.

Stuck in the Middleton

The lone bright light for the Bucks yesterday was Khris Middleton and his 29-point performance. The small forward had the unenviable task of matching the scoring of Suns trio Paul, Booker and DeAndre Ayton – all of whom combined for 81 points together.

Giannis’ injury could be a factor, but the Bucks’ ‘big three’ can’t be a reality if Jrue Holiday continues to remain absent in these Playoffs. The point guard scored a measly 10 points and missed all of his four three-pointers attempted.