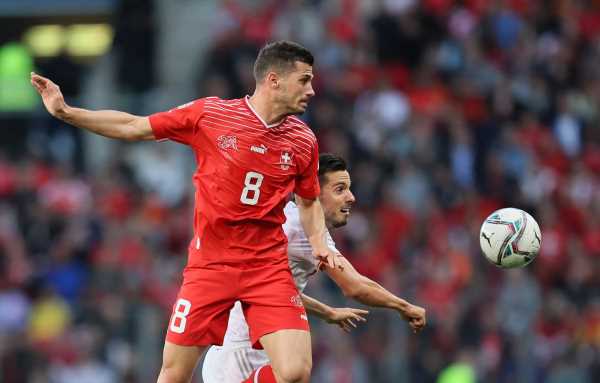 An early goal from Pablo Sarabia earned Spain a 1-0 win in Switzerland on Thursday, their first victory of this year’s UEFA Nations League.

Last year’s finalists dominated the game from the start but were only able to score once, when Sarabia struck from close range in the 12th minute following a low cross by Marcos Llorente.

After a mistake by the Swiss defence, the Atletico Madrid winger found Sarabia ghosting in between two opponents inside the six-yard box and he scored with a first-time shot.

Spain have five points from their opening three Group A2 matches to sit two behind leaders Portugal and two ahead of third-placed Czech Republic.

Switzerland have suffered three consecutive losses and are winless in their last five games since qualifying for this year’s World Cup.

Spain host the Czechs in Malaga and Switzerland entertain Portugal in Geneva on Sunday.

Spain coach Luis Enrique made eight changes in the starting team that struggled to a 2-2 draw with the Czech Republic last time out.

Llorente and Sarabia were the main focus of Spain’s attack with their pace, fed by precise passes from teenager Gavi behind the Swiss line.

Spain enjoyed almost 70% of possession, but forwards Alvaro Morata and Ferran Torres lacked the precision to make it pay. Portugal defender Joao Cancelo and winger Goncalo Guedes scored in five first-half minutes as they secured a 2-0 win over the Czech Republic in their UEFA Nations League clash on Thursday.

Cancelo put the 2019 champions in front in the 33rd minute of the League A Group 2 contest, blasting the ball past Czech goalkeeper Jindrich Stanek from a tight angle after good work on the right before Guedes struck.

The Valencia forward found himself in space and tucked in from a similar position to Cancelo to double Portugal’s lead as Fernando Santos’s side tightened their grip on top spot in the group with seven points from three matches.

Portugal travel to Switzerland on Sunday, having sealed an emphatic 4-0 home victory in their previous meeting. 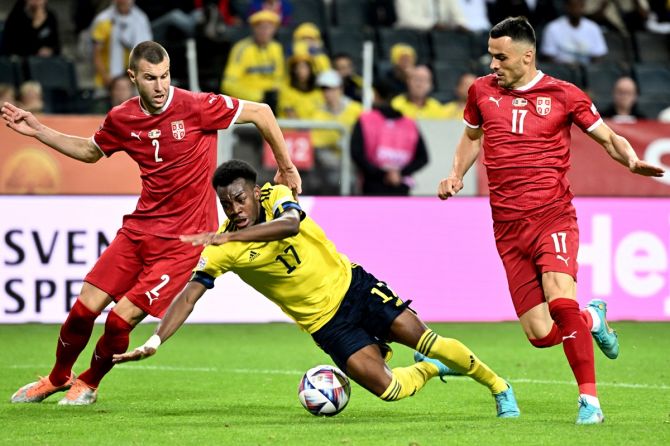 A first-half goal by Luka Jovic earned Serbia a 1-0 win away to Sweden in their Nations League Group B4 clash on Thursday as the Swedes slumped to their second home defeat in a row thanks to another flat performance.

The visitors took the lead just before the break when Strahinja Pavlovic headed a corner back across goal to Jovic, and he reacted quickly to hook the ball home past Robin Olsen.

Missing several first-choice defenders through injury, the Swedish attack again looked short of ideas as they registered a single shot on target and the Serbs held on for a comfortable victory.

Serbia remained second in the group on six points, one behind Norway who played out a scoreless draw with bottom side Slovenia in Oslo. The Serbs travel to Slovenia on Sunday while Sweden head to Oslo to play Norway.

Slovenia overcame the sending-off of defender Miha Blazic to grab their first point of their Nations League Group B4 campaign as they held Norway to a 0-0 draw in Oslo on Thursday.

Slovenia were reduced to 10 men in the 63rd minute when Blazic was shown a straight red card for bringing down Erling Haaland when he was through on goal, and Martin Odegaard hit the resulting free kick against the crossbar.

Haaland had plenty of chances but could not add to his tally of three goals in the competition, and Alexander Soerloth missed a great chance to grab all three points, firing over the bar in the 75th minute as the visitors hung on for a point.

Norway top the group on seven points, one ahead of Serbia, who beat third-placed Sweden 1-0 in Stockholm. The Norwegians host the Swedes on Sunday while Serbia travel to bottom side Slovenia.