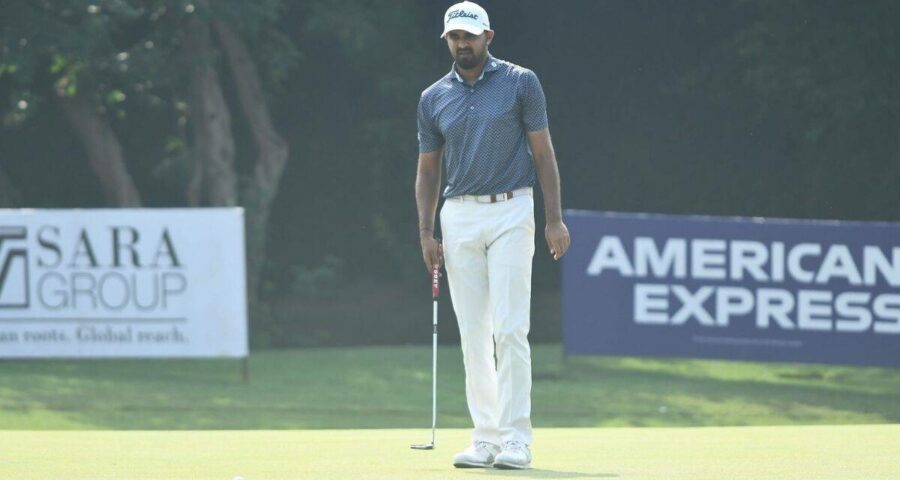 Khalin Joshi of Bengaluru emerged sole leader with a combined score of nine-under 135 after the second day’s play of the Rs 70 lakh TATA Steel PGTI MP Cup at Delhi Golf Club on Wednesday.

DGC is back in the golfing map after a gap and when it last hosted – Asian Tour event – Khalin emerged the champion. It seems the Bengaluru lad began from what he left in 2018 on Wednesday. Confident with the put Khalin struck a six-under 66 studded with seven birdies and a bogey to climb six places and take the sole lead with a combined score of nine-under 135 at the halfway stage. On the first day, Khalin was tied seventh at three-under 69.

The cut went at two-over 146. Fifty-two professionals and one amateur made the cut. Tokyo Olympian Udayan Mane missed the cut after his two rounds score was 10-over 154 while star Jyoti Randhawa withdrew due to an injury. Udayan also missed the season opener event Golconda Masters in Hyderabad last month.

Khalin began the day on a high thanks to a 15-feet birdie conversion on the first while adding two more birdies and a bogey on the front-nine to make the turn at two-under for the day. The four-time PGTI winner began building momentum on the back-nine with an excellent approach shot from 140 yards on the 11th that landed inches from the pin for a tap-in birdie. He followed that up with a 15-feet putt for par save on the 12th.

The 29-year-old wrapped up the day with three more birdies on the last five holes. He fired another outstanding approach from 130 yards on the 15th which missed the hole narrowly and gave him an easy birdie putt.

“My confidence comes from the fact that I’m rolling the putts well and my wedge-play has been terrific. I’m feeling good about my game at the moment. I have great memories of this course having won an Asian Tour event here in 2018. But the DGC’s greens are totally different now and it’s a ball-striker’s course now, something that I’m enjoying,” said Khalin.

Veer not only went error-free but made 16 greens in regulation and had a chip-in birdie.

“I feel my course management is much better at the DGC now as compared to before. I play it safer with my tee shots and try to attack with my approach shots. I also felt I could’ve gone lower as I didn’t capitalize on all the par-5s making birdies on just two out of the four par-5s,” Veer said.

Delhi’s Rashid Khan, the overnight joint leader, slipped to tied 12th at four-under 140 after a round of 73. Indian star Shiv Kapur shot a 67 to be tied 15th at three-under 141. Another star attraction SSP Chawrasia was tied 34th at one-over 145. Round one joint leader Ajay Baisoya of Delhi dropped to tied 42nd at two-over 146.

The only amateur to make the cut was Arvind Khanna of the Delhi Golf Club who was tied 42nd at two-over 146.