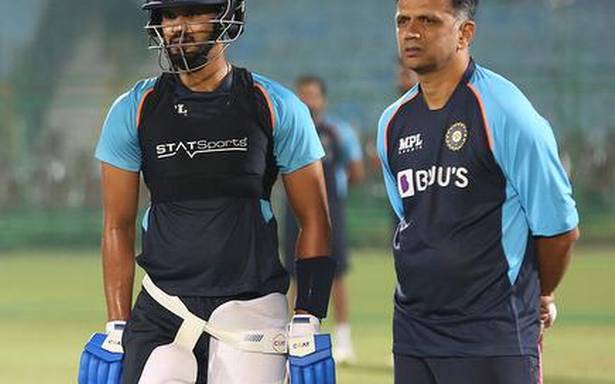 Have to manage players’ workload and get everyone ready for big tournaments, says the head coach

India head coach Rahul Dravid stated that the mental and physical health of players takes top priority, given the stresses of playing in a bubble. Dravid, who takes over from Ravi Shastri, explained that workload management is required to keep players fit and ready for big tournaments.

“Workload management is a necessary part of cricket now. We see this in football as well. In a long season, star footballers do not get to play every match. If we play cricket through the year, we will have to practise workload management.

“The players’ mental and physical health is most important. The team’s success is a priority as well. It is a balancing act. We have to work towards getting everyone fit and ready for the big tournaments,” Dravid said in a media interaction on Tuesday.

“We are not looking at picking separate teams for each format. But I will be in conversation with players to ensure that whenever they play, they are fresh and fully switched on. We have to recognise that these are challenging times for players, especially for those who play all three formats,” Dravid said. Still new on the job, Dravid explained that for now, he will sit back, observe how things function and step in when required. “Certain principles of coaching remain the same, but I cannot say that I will simply follow everything I did at the under-19 level.

“I will take some time to learn what the players want. It is my responsibility, as part of the coaching staff, to mould myself to get the best out of the player,” Dravid said.

Dravid, incidentally, was skipper when Rohit Sharma made his ODI debut in 2007, against Ireland at Belfast. “Time flies, doesn’t it? Even before Belfast, we were playing a Challenger tournament in Madras (Chennai) when Rohit was coming through the ranks as an under-19 player.

“We all knew that Rohit was going to be a special talent. That I would be working with him all these years later is not something I envisaged,” Dravid said.