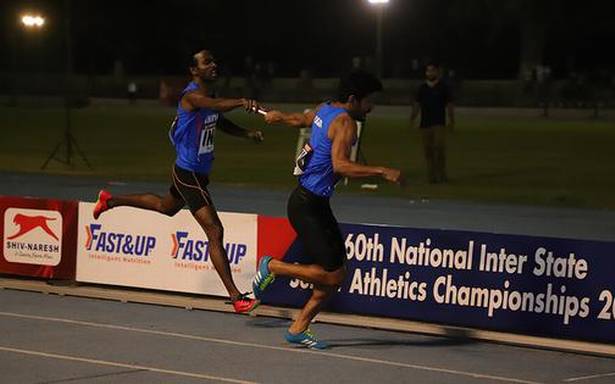 Assures itself of an Olympic spot; women’s 4x100m team yet to make progress

The Indian men’s 4x400m relay team had been holding on precariously to the last qualifying spot for Tokyo Olympics for a long time now. On Friday, the quartet broke the three minute two second mark at the National inter-State championships, bettering the meet record and lifting itself up the rankings to be assured of an Olympic spot.

Anchored by Noah Nirmal Tom and comprising Mohd. Anas Yahiya, Arokia Rajiv and Amoj Jacob, the team clocked 3:01.89 in the heats, a timing which is likely to lift it to 13th place on the Road to Tokyo.

Running in an almost empty stadium at the National Institute of Sports under floodlights, with part of the track in darkness, the competition was all but over when Jacob pulled away in the second leg before Tom accelerated in the last few metres. They now have a chance to further improve in the final.

It was the only highlight on the opening day of the tournament that saw middling to mediocre performances in the few finals held even as the women’s 4x100m failed to make any progress in its quest for an Olympic spot.

The foursome of Hima Das, Dutee Chand, Archana Suseendran and Dhanalakshmi managed 43.50 seconds to win its heat but not good enough to improve from the current 20th position.