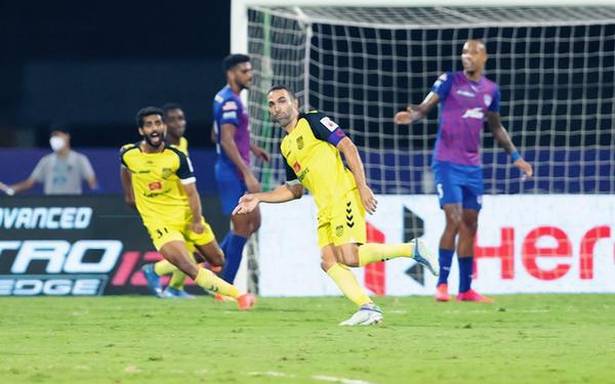 Sunil Chhetri netted his historic 50th goal and became the ISL’s leading scorer alright, but that just wasn’t enough for Bengaluru FC on Friday night. His team was beaten 2-1 by Hyderabad FC at the GMC Athletic Stadium, Bambolim.

Significantly, neither of the Hyderabad goals came from Bartholomew Ogbeche, who, like Chhetri, had begun this match on 49 goals. The winning team’s goals were instead netted by Javier Siverio and Joao Victor, both in the opening half.

It was indeed a disappointing outing for the Bengaluru captain and his men, as they saw their unbeaten run finally coming to an end — after nine games.

With the win, Hyderabad has extended its lead at the top of the table to four points. It has 29 points from 16 games. Bengaluru remains third on 23 points, two behind Jamshedpur FC, which has a game in hand.

Bengaluru had started well on this night, as its formidable frontline had the Hyderabad defence concerned early on. The Hyderabad defenders, though, proved up to the task. The same, however, could not be said about their Bengaluru counteparts.

A superb, swift move down the left flank by the hard-working Rohit Danu paved the way for the first goal. He cut into the box to cross the ball, which, though, could not be connected properly with by Ogbeche.

Siverio, however, made it count, as he beat the outstretched hands of keeper Gurpreet Sandhu.

Fourteen minutes later, a smartly — and rather quickly — taken short free-kick by Sauvik Chakrabarti set Victor up to make it 2-0.

The highlight of the second half was, of course, that goal by Chhetri — off a deft pass from substitute Udanta Singh. It came too late, though.