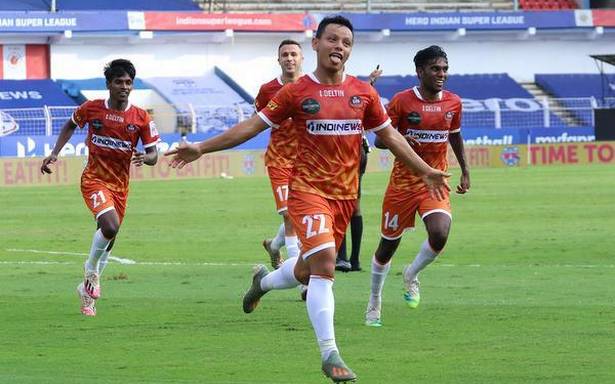 FC Goa knocked Bengaluru FC (BFC) out of the ISL playoff race with a 2-1 victory at the Fatorda Stadium, Margao, on Sunday.

Early goals from Igor Angulo and Redeem Tlang left BFC with a mountain to climb in a must-win game. Suresh Wangjam’s first-ever ISL strike provided hope, but a solid second-half performance by Goa ensured BFC will not make it to the last four for the first time in its ISL history.

For Goa, it was a statement win, as it took the lead in what increasingly appears a three-way race with Hyderabad FC and NorthEast United FC for the two remaining playoff spots.

Goa is now on 30 points with one game left, while the other two are tied on 27 with two matches remaining.

Goa first scored in the 20th minute, when Glan Martins robbed the ball off Erik Paartalu and the resultant pass was turned in by Angulo for his 13th goal of the season. Three minutes later, Tlang doubled the lead, capitalising on BFC’s failure to clear the ball out of the penalty area.

Between the goals, Goa custodian Dheeraj Singh was lucky to escape when he misplaced a pass straight to Sunil Chhetri. But BFC sprang to life soon, with Wangjam skipping past right-back Seriton Fernandes and curling it into the top-right corner.

BFC should have scored at least thrice more in the first half. Cleiton Silva planted a free header wide and when he got it on target, the ball bounced off the bar. The Brazilian then saw a glancing header saved by Dheeraj.

The half-time break helped Goa regroup and it nearly put the tie to bed ten minutes after the restart, but Angulo’s attempted dink over Gurpreet Sandhu bounced wide.

Goa was compact for the next half hour and didn’t allow BFC as much as a sniff, pocketing three important points.