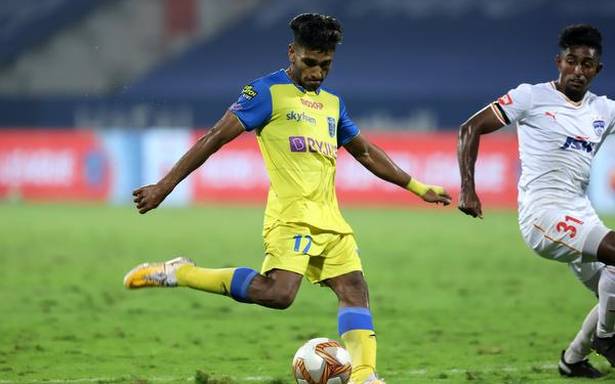 Rahul and Lalthathanga on target for the Kerala side

Kerala Blasters ran out 2-1 victors over Bengaluru FC (BFC) following a stunning smash-and-grab at the GMC Stadium in Bambolim on Wednesday. K.P. Rahul’s strike three minutes into injury time, via a low drive from just inside the penalty area, brought his side only its third win of the season and lifted it above East Bengal into ninth place on 13 points.

The goal came from a swift counter-attack after BFC’s Cleiton Silva had hit the post with an overhead. Minutes before that, substitute Leon Augustin had burst through the Blasters defence but couldn’t finish a one-on-one. Naushad Moosa’s wards have now not tasted a win in six matches and are tied with the Blasters on points.

Earlier, Moosa shook things up by playing Sunil Chhetri centrally and Udanta Singh just off him. The two looked lively all through the first half, though it would have served BFC better if their teammates had kept the ball well.

The first two chances, both in the opening quarter, fell to the Blasters, with defender Costa Nhamoinesu failing to hit the target from six yards out and Gary Hooper sending a looping shot just wide.

BFC made Blasters pay in the 24th minute through an acrobatic volley from Silva. Rahul Bheke’s long throw fell to the Brazilian and he hoodwinked goalie Albino Gomes by going for the near post rather than across the goal. Chhetri nearly doubled the lead just before half-time, but his freekick was saved well by Gomes.

Blasters’ attacking patterns improved in the second half and the equaliser, through scrappy, came after sustained pressure. On 73 minutes, Hooper’s shot from point-blank range hit BFC custodian Gurpreet Sandhu in the face and floored him. But Juanan’s failure to clear the stray ball resulted in Lalthathanga Khawlhring smashing it in.

With 10 minutes to go, Rahul fluffed a one-on-one with a weak connection. But he wouldn’t be denied his moment of glory.