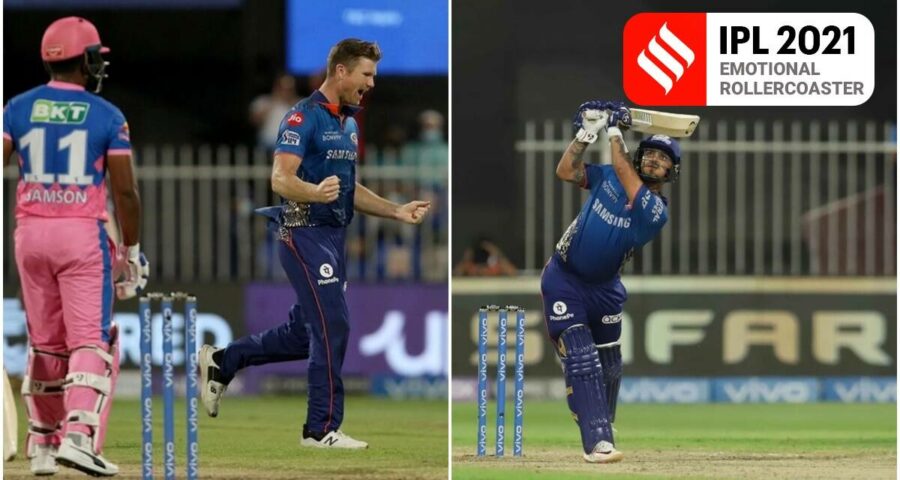 Emotional Rollercoaster: Mumbai deal in 4s &6s scoring 66 of 94 runs through boundary shots as Rajasthan is smothered in 8.2 overs 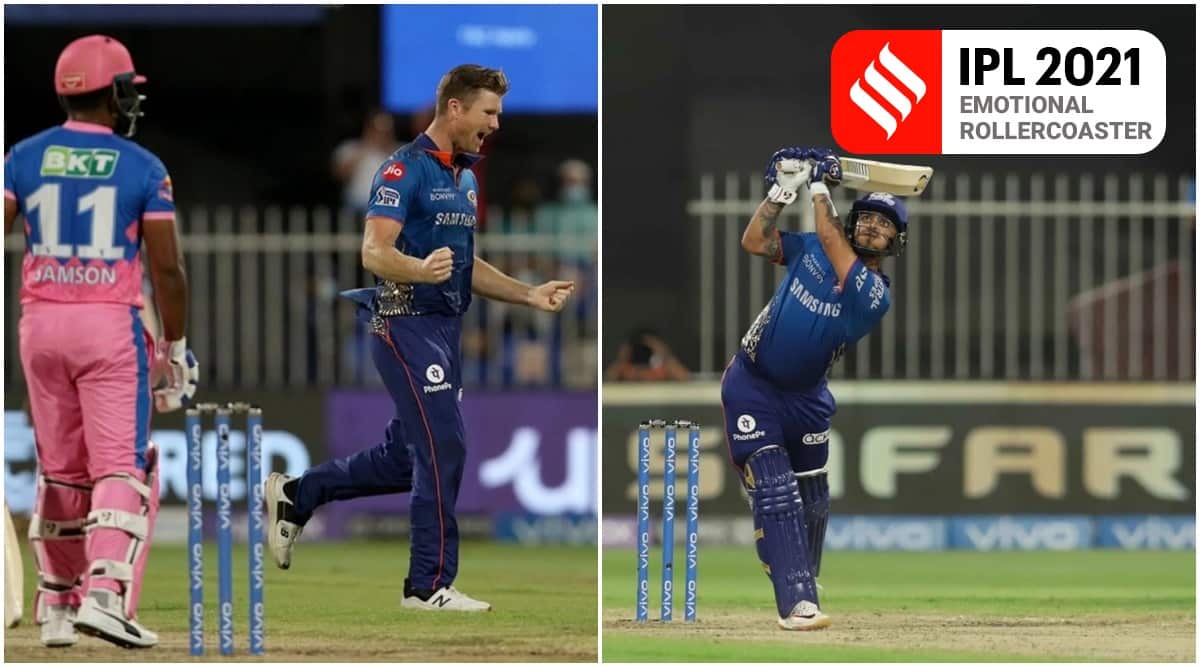 Sealed with a kiss

For the under-the-weather Ishan Kishan, the 25-ball 50 not out might have felt like a kiss of life, a much-needed respite from a string of low scores in the IPL before the biggest test of his career. The T20 World Cup later this month. He got a literal kiss on his helmet too, by his colleague Hardik Pandya, the non-striker when he struck the winning runs, a beefy six of Mustafizur Rahman in just the second ball of the ninth over. He clenched his fists and punched the air, and just as he was about to take off the helmet to further ventilate his joy, Pandya wrapped his arms around him and kissed on Kishan’s helmet. Soon after, he was swarmed by his onrushing teammates, though none of them kissed him.

Maybe, we have to wait until tomorrow to get a proper reaction. Jimmy Neesham channeling his inner Jimmy Anderson and taking out Sanju Samson probably deserves a Twitter reaction from a prolific Twitterati who revels in the cultured pun on the platform. A huge smile captured his real time emotion. It was about the trickery of a wobble ball that Neesham bowled to the Rajasthan Royals captain, who tried to cut it but was done in by the extra bounce. Anderson isn’t the inventor of a delivery of that variety. He learned the ropes from Australia’s Stuart Clark. But the England great has mastered the art and in the recently concluded Test series, he teased almost every Indian batsman with the unpredictablity of the wobble seam movement. Neesham, though, was operating with a white ball. It was his first ball of the match, bowled a touch slower and the seam wobbling. It bounced a bit more than what Samson expected, forcing him to slice it rather than play a cut. Jayant Yadav at point took the catch.

Even Jimmy Neesham could not believe that he struck with his first ball of the night. A flash of shock flickered across his face. If he indeed pinched himself to interrupt a lovely dream, the cameras missed it, but could have been believable. He doesn’t take wickets too often or in a bounty. Samson’s was just his fifth in IPL. Even when his teammates congratulated him, he seemed bemused, even slightly dazed. In that sense, he is antithetical to his chaotically-manicured image on social media, where he is all ballast and bombast. Reasons for which he is the darling of Twitteratis. Few are as much trolled or bantered; fewer still cop the troll and banter as sportively as the Kiwi all-rounder either. So the moment he bagged a wicket with his first ball, dislodging Sanju Samson, all hell broke loose in the twitter-scape. One of them quipped, with a snatch from Manoj Bajpayee in Gangs of Wasseypur with a caption inscribed on it: “Pura ilaka dhuan dhuan kardenge”. Another quipped: “Getting out to Neesham is the biggest crime in the world.” The ridicule had started the moment his name was announced rather surprisingly in the playing eleven, like “Much needed break from Twitter for,” to “He is at least bowling (not on Twitter). Neesham would, of course, come up with something silly/funny/slapstick post-match, but before that Mumbai Indians posted a GIF of him peeling out flying kisses with his eyes almost leaping out of the sockets.

Glenn Phillips would not bother watching a replay of his dismissal against Mumbai Indians ever in his life. Even if he is held at gunpoint, he would rather let the bullet pierce through the memory of his dismissal. Phillips pivoted to pull a short ball from Nathan Coulter-Nile. On the choice of the shot, he could not be faulted. But the ball, drugged by the sleepy pitch, didn’t bounce as much he had gauged, and it snuck through his legs, and under his thin-air swipe, to hit the leg-stump. A proper nut-meg, the ultimate weapon of humiliation in football, and here in cricket too, if though not entirely by design. Phillips stood flabbergasted, sneering and sniggering at the pitch, embarrassed. So red-faced that he didn’t even bother stopping by the incoming batsman or the dug-out; he sprinted up the stairs to the dressing room. He was later seen sprinting as a pink blur with some phenomenal dive saves at the boundary.

Was it a bird, a plane or a ball? None of these. It was the bat that slipped out of Rohit Sharma’s slippery gloves. It arguably flew higher than the ball he had miscued. Sharma, in pursuit of as many runs as possible in as few balls as he could, threw his bat at a good length ball of Chetan Sakariya. Only that Sharma realised the ball was not quite there, but he had already committed to the stroke. So he tried to bail himself out of trouble by imparting more power into the shot. In the process, the bat flung out of his hands and high into the air. For a split second, it threatened to crash into Sanju Samson, who was halfway into protecting his head with his hands. Sharma was confused: whether to watch the ball or the bat, which could have shattered his own helmet, before slumping midway between Samson and Sharma, not harming either.