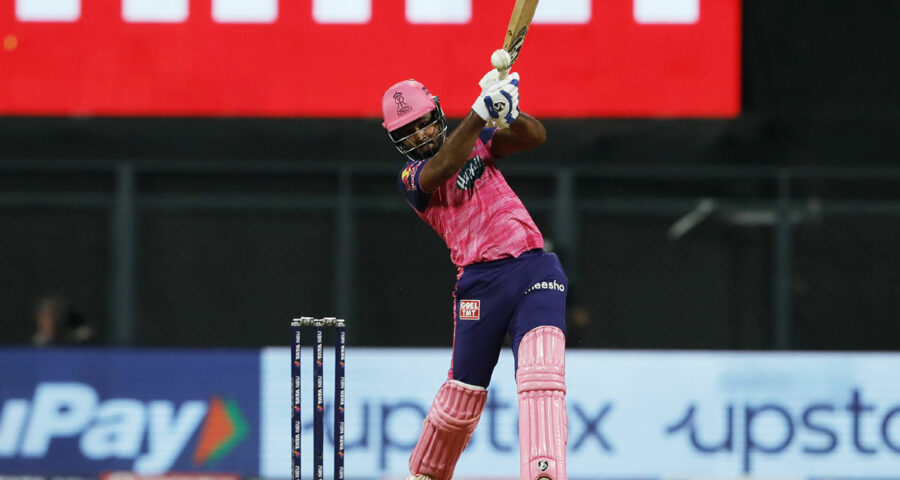 Images from the IPL 2022 match between Rajasthan Royals and Kolkata Knight Riders at the Wankhede Stadium in Mumbai on Monday.

Sanju Samson hit a half-century but Rajasthan Royals were restricted to 152/5 courtesy of a discplined performance from the Kolkata Knight Riders bowling unit, in the IPL 2022 match at the Wankhede Stadium in Mumbai on Monday.

For Royals, Samson’s 54 off 49 balls was the only saving grace, as wickets tumbled at regular intervals after they were put into bat.

Shimron Hetymer smashed 27 not out off 13 balls in the death overs to take Royals beyond the 150-run mark. Royals lost opener Devdutt Padikkal (2) cheaply as pacer Umesh Yadav took a sharp catch off his own bowling in the third over.

Samson, who hit seven boundaries and a six, and Jos Buttler steadied Royals after the early wicket as they put on 48 runs for the second wicket.

KKR kept things tight in the Powerplay as they kept check on the flow of boundaries. Samson and and Buttler broke free in the fifth over, which went for 15 runs, as Umesh was hit for three boundaries.

Samson lofted Anukul Roy for a six over the off-side but Royals managed just 38 runs in the six overs of Powerplay.

Tim Southee dealt Royals a big blow when he got the in-form Buttler caught at long-on after a slow 22 from 25 balls. Karun Nair (13) and Riyan Parag (19) also failed to carry on after getting off to starts. Samson was caught in the deep off Mavi as Royals slipped to 115/5 in the 18th over.

Hetmyer hit Southee for two sixes in a row to score 20 from the 19th over but Mavi did well to give away just 10 from the final over.

The West Indian left-hander put on a quickfire stand of 37 runs from 18 balls with Ravichandran Ashwin (6 not out) to push Royals beyond the 150-run mark.