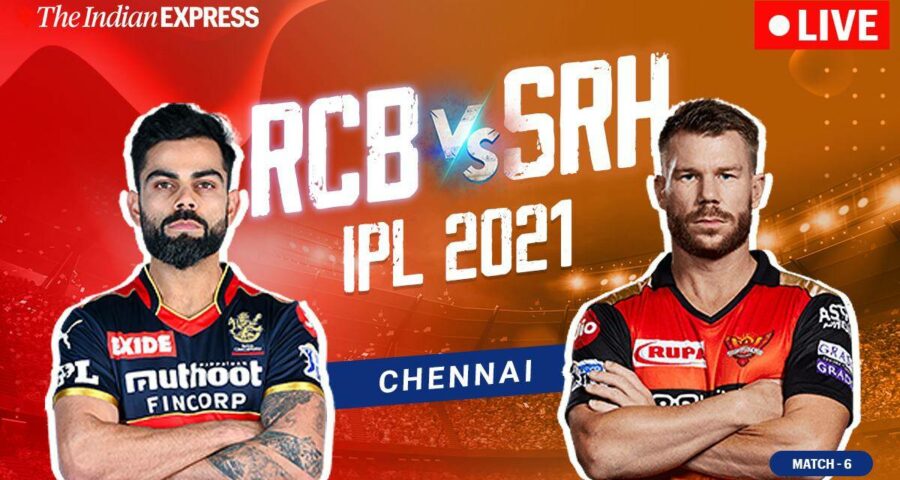 IPL 2021 Live Score, SRH vs RCB Live Cricket Score Streaming Online Updates: Kane Williamson is likely to miss the game as coach Trevor Bayliss said he is yet to regain fitness. Williamson will be a valuable addition to SRH side especially on a tricky Chennai wicket. IPL 2021, SRH vs RCB Live Cricket Match Score Online Updates: Match number six of Indian Premier League (IPL) 2021 will be played between Sunrisers Hyderabad (SRH) and Royal Challengers Bangalore (RCB). David Warner won the toss and elected to field first. It will be broadcast on Star Sports 1, Star Sports 1 HD and the live streaming will be available on Hotstar. RCB registered a one-run victory over defending champions Mumbai Indians (MI) in the IPL opener whereas SRH lost their first game of the tournament against Kolkata Knight Riders (KKR). RCB are unlikely to make one change in their side replacing Shahbaz Ahmed with opener Devdutt Padikkal. Ahmed did not make an impact in the first game with his bowling. Padikkal did not play the first game as he just came back to the camp after recovering from Covid-19.

SRH’s bowling lineup did not live up to its reputation in the first game. Bhuvneshwar Kumar was the most expensive bowler of the lot for SRH. It will be interesting to see whether SRH stick with Mohammad Nabi on a spin-friendly Chennai pitch or include all-rounder Jason Holder in the side. Sandeep Sharma has been impactful against RCB in previous seasons and is expected to be retained in the playing XI as well. Once again, Kane Williamson is likely to miss the game as coach Trevor Bayliss said he is yet to regain fitness. Williamson will be a valuable addition to SRH side especially on a tricky Chennai wicket.

Virat Kohli and Devdutt Padikkal to open the innings for RCB. Bhuvneshwar Kumar will open the bowling with skipper Kohli on strike.

Last season’s highest run-scorer for RCB is back in the side. Devdutt Padikkal will open the innings alongside Virat Kohli. Padikkal replaces Rajat Patidar. Kohli said at the toss that the No.3 batsman will be Shahbaz Ahmed. On the other side, Jason Holder replaces Mohammad Nabi and Shahbaz Nadeem replaces Sandeep Sharma despite the latter’s record against RCB.

Hello and welcome to the live blog of sixth game of the tournament to be played between SRH vs RCB. In the last season SRH had the upper hand over RCB. SRH won two out of three games against Virat Kohli’s side including the eliminator. RCB will have a chance to avenge their defeat in the playoffs against SRH who are struggling to find the right combination.