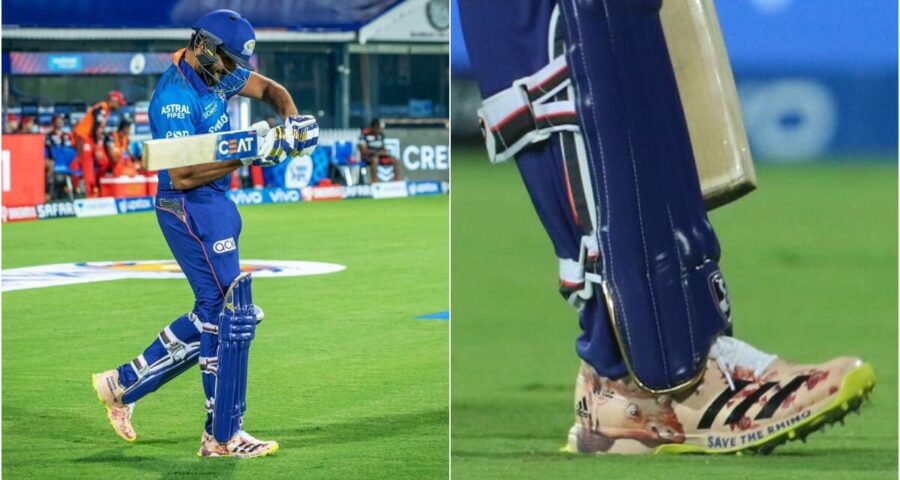 Rohit Sharma launched the "Rohit4Rhinos" campaign in September 2019, in partnership with WWF India and Animal Planet. Mumbai Indians skipper Rohit Sharma came into the limelight in his team’s IPL 2021 opener against Royal Challengers Bangalore on Friday when he wore shoes with the message “Save the Rhino”.

Rohit has taken a unique approach in this year’s IPL to speak up about a cause that he has long supported — the conservation of the Great One-Horned Rhinoceros.

The 33-year-old swashbuckling opener launched the “Rohit4Rhinos” campaign in September 2019, in partnership with WWF India and Animal Planet.

Kevin Pietersen, the former England captain, took to Twitter and hailed the gesture saying, “The great man’s boots last night in the IPL opener. Rohit Sharma continually playing for a cause – SAVING RHINOS!”

Of the estimated 3500 Indian rhinos left in the world, 82% are found in India. Once found abundantly across the Indus, the Ganges, and the Brahmaputra river basins, the animal is now found only in select pockets in Assam, West Bengal, Bihar, and Uttar Pradesh.

The state animal of Assam, the Indian rhinoceros faces several threats, including poaching, habitat loss, and mass mortality from inbreeding and disease.

The defending champions lost the IPL 2021 opener by two wickets at the MA Chidambaram Stadium in Chennai. Mumbai Indians are set to face Kolkata Knight Riders next on April 13.