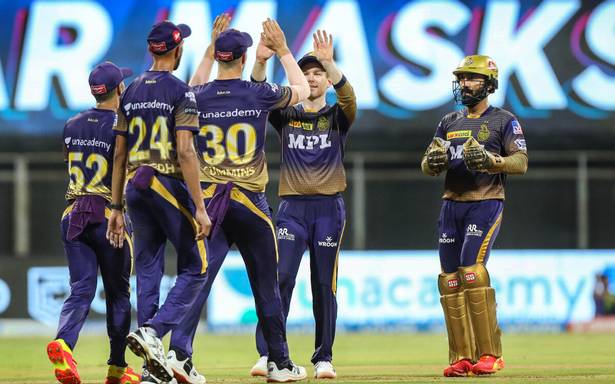 Both teams looking to revive campaign, but Morgan’s side has more options than Samson’s

Rajasthan Royals’ fragility and inconsistency in IPL-14 so far make Kolkata Knight Riders the favourite for Saturday’s clash at the Wankhede Stadium in Mumbai.

Both sides have won just once in four games and are looking to revive their campaigns, but KKR is a little ahead in terms of planning and execution. It almost chased down 221 against Chennai Super Kings even after being five down for 31 inside the PowerPlay at the same venue.

RR slipped to eighth after failing to defend 178 against Royal Challengers Bangalore, losing by 10 wickets.

The slow strip in Chennai had curbed the big shots, resulting in low-scoring games. The Mumbai pitch has offered a welcome change.

If KKR wants to attack up front and at the death, Lockie Ferguson should be on pace duty with Pat Cummins, as the conditions suit the New Zealander.

It remains to be seen whether Sunil Narine makes way for Ferguson. In that case, Harbhajan Singh may rejoin Varun Chakravarthy in the spin department while Kamlesh Nagarkoti sits out.

RR skipper Sanju Samson has not delivered since the ton in the opener against Punjab Kings. His inconsistency remains a talking point.

Even big-ticket all-rounder Chris Morris has not flexed his muscles except in one game against Delhi Capitals where his golf-like swing of the bat took RR home. Bought for ₹16.25 crore, he will be under pressure to deliver.

Young left-arm pacer Chetan Sakariya has impressed with six wickets in four games. RR could include right-arm quick Kartik Tyagi in the mix as an experiment.

Andre Russell’s 22-ball 54 against CSK has sounded an ominous note of warning to the bowlers. Samson will need a plan to restrict the Caribbean star.