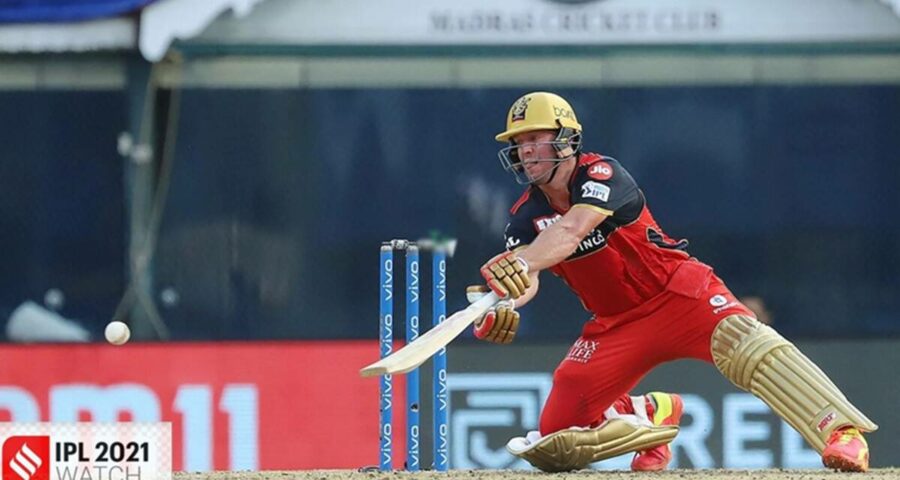 Watch how AB De Villiers blazed away to 76 off 34 balls with the help of nine fours and three sixes.

RCB scored 56 runs in the last three overs, including 21 in the final six deliveries, to set KKR a stiff target of 205 after electing to bat.

De Villiers walked in when RCB were at 95/3 after 11.1 overs. From that point, he built a partnership with Glenn Maxwell. When he was finally dismissed, the damage had been done with 76 from 34 balls. 55 of those runs came in the last 5 overs.

De Villiers blazed away to 76 off 34 balls with the help of nine fours and three sixes. Throughout his innings, the Proteas batsman was in total control and played shots all around the ground living up to his tag of ‘Mr 360’. The cover drive was his most productive shot with 22 runs coming from that shot.

De Villiers was particularly lethal on Andre Russell, who after a sensational last over in the previous game, was taken apart by ABD in a 21-run over.

The Knight Riders were off to a brilliant start with leg-break bowler Varun Chakravarthy leaving RCB in early trouble at 9/2 with the big wickets of skipper Virat Kohli (5) and Rajat Patidar (1) in the second over.

Opening the bowling for KKR, veteran off-spinner Harbhajan Singh bowled a tight line and length to stifle the RCB batsmen in his first two overs.

After Chakravarthy lured Kohli to go over cover with a tossed-up delivery that drifted away from the right-hander, Rahul Tripathi pulled off a sensational catch running back from extra-cover. The top batsman was nowhere close to the ball.

Chakravarthy then went through the defence of Patidar with one that darted back on landing.

Mixing aggression with caution, Maxwell and Devdutt Padikkal (25) revived the RCB innings after the early blows at the MA Chidambaram Stadium.

While the young Indian seemed content playing the second fiddle, the swashbuckling Australian counter-attacked in fine fashion and played the big shots with consummate ease.

The in-form Maxwell upped the ante when he cleared his front leg to plonk Shakib Al Hasan over long-on for his first maximum in the sixth over.

The one bowled by Shakib turned out to be a productive over for RCB as they got 17 runs off it.

After reaching 45 for two at the end of the six powerplay overs, Maxwell shifted gears and raced to his half-century in just 28 balls. Even Chakravarthy, who was on fire some time ago, was not spared by Maxwell as he smashed him for a six and four off successive balls.

Prasidh Krishna ended the third-wicket partnership of 86 runs by sending back Padikkal, which signalled the arrival of De Villiers in the middle.

Joining forces, the dazzling duo of Maxwell and De Villiers did not allow the KKR bowlers to settle into any sort of rhythm until premier pacer Pat Cummins ended their 53-run association.

After that, the show belonged to De Villiers as he toyed with KKR bowlers.