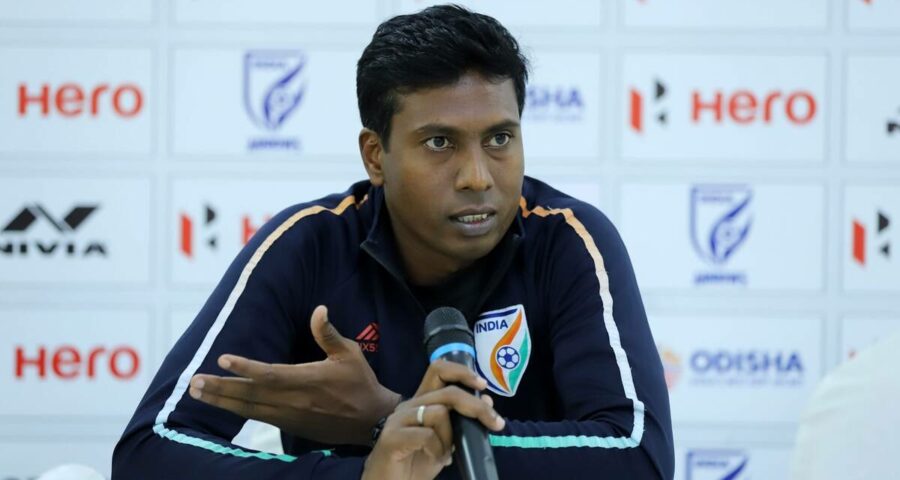 India are already out of reckoning for a FIFA 2022 World Cup berth but are still in with a chance of advancing to the next round of AFC 2023 Asian Cup qualifiers. Delving into the minute technical details, Indian football team assistant coach Shanmugam Venkatesh says the current side has enjoyed more ball possession and made more accurate passes than the squad for the 2018 World Cup Qualifiers.

India are already out of reckoning for a 2022 FIFA World Cup berth but are still in with a chance of advancing to the next round of 2023 AFC Asian Cup Qualifiers.

Venkatesh, who also led the senior national team in his playing days, says current squad has improved on many fronts.

“A direct comparison with the first 7 matches of previous World Cup qualifiers — the FIFA World Cup Russia 2018 qualifiers which kicked off in 2015 shows us that the average ball possession of the current squad has increased by 10.2% — going up from previous 39.8 % to 50%,” he was quoted as saying by the official AIFF website.

“During the previous qualifiers, the number of passes per match was 338 in comparison to 450 in the new set-up. The current passing accuracy is 80% in comparison to 74% previously — an increase of 6 percent.

“The accuracy of the long passes also narrates a positive story — currently it is at 71% in comparison to it being 56% previously,” Venkatesh added.

India broke a long winless streak with a convincing 2-0 win over Bangladesh in their previous outing of the joint World Cup and Asian Cup Qualifiers here.

The lack of enough favourable results notwithstanding, Venkatesh feels the team has evolved a lot over the years and changed its outlook.

“It has evolved a lot. There’s always a pathway for evolution.

“Looking at the international calendar, there are three stages of the preparatory process — unofficial friendly matches, international friendlies, and then the official qualifiers and tournaments. As these are different stages of preparation, the process of selection and approach also stay different.”

He spoke about the difference in intensity between club and international football, and the need to keep experimenting with various players, something which head coach Igor Stimac has done since takeing over the reigns two years ago.

“It’s about the squad which you select. In club football you get two matches every 10 days which allows you to look at every player who has been performing well and improve within a short span.

“The FIFA window is written in stone ? March, June, September, October and November, and then there are unofficial matches. In unofficial matches and exposure games, the aim is to try out as many young and new players as possible. Unless you try, you won’t get to know.

“You have to give a chance to the deserving youngsters to see how they react and gauge their decision-making. After all of that, you move to the Qualifiers and the tournaments wherein there can’t be any compromise.”

He was asked about the new set of players who have donned the India jersey since the King’s Cup in 2019.

“Indian football has changed its outlook. From the camp for the King’s Cup, we began our journey from scratch and looked for players who are adept in more technical play.

“The easier way would have been to look for six players who can defend, and four who could chase, and someone who could score. The entire process is for Indian football’s secured future.”

Talking about international friendly matches, he said, “The idea is to play matches against extremely tough opposition. The March friendlies were against Oman and UAE — who are among the top teams in Asia. Playing Curacao was also a novel experience for the boys.

“It serves no purpose playing lower-ranked teams. The AIFF also needs to be complimented for arranging all of that.”