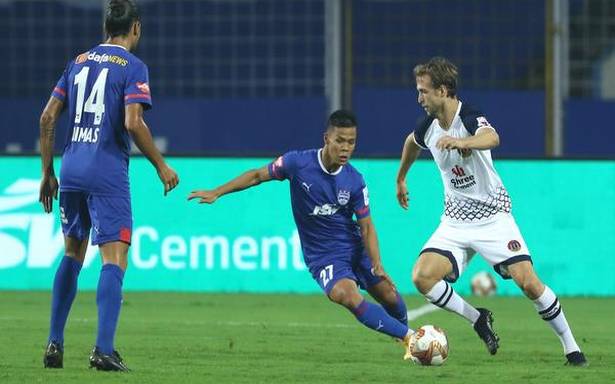 Bengaluru FC’s post-Carles Cuadrat era was off to a disappointing start as SC East Bengal handed the 2018-19 ISL champion its fourth successive defeat by beating it 1-0 at the Fatorda Stadium on Saturday.

Interim coach Naushad Moosa handed defenders Ajith Kumar and Parag Srivas their first starts and gave another in Namgyal Bhutia a debut. But all they could do was watch as East Bengal goalkeeper Debjit Majumder’s heroics ensured that Matti Steinmann’s early goal would prove the winner.

In the first half hour, BFC offered very little resistance and East Bengal routinely found space behind the two full backs. In the 20th minute, left-back Ajith’s mistake led to Ankit Mukherjee launching the ball across the penalty area into Narayan Das’ path, whose low cross was converted by Steinmann with the outside of his boot.

BFC’s game slowly picked up, with a long-range effort from Erik Paartalu and an excellent set-piece routine on the stroke of half-time raising hopes. The uptick carried into the second half and it scored almost immediately after the restart, but Sunil Chhetri’s fierce left-footer, after a lovely one-two with Kristian Opseth, was parried away at the near post by Majumder.

Opseth was involved in a similar move with Cleiton Silva, but couldn’t reach the return ball. On 62 minutes, Majumder denied Chhetri again, this time with a diving one-handed effort. It seemed like East Bengal was tiring, but Bright Enobakhare sprang to life, only to meet his match in Gurpreet Sandhu, who fended off his low drive from the edge of the area. Moments later, the Nigerian fluffed a one-on-one after receiving the ball on the counter.

The Kolkata giant nearly paid for it, but Daniel Fox came to his team’s rescue, blocking a powerful shot by Paartalu from close range. Robbie Fowler’s outfit held on for only its second win of the season even as BFC dropped to sixth in the table.